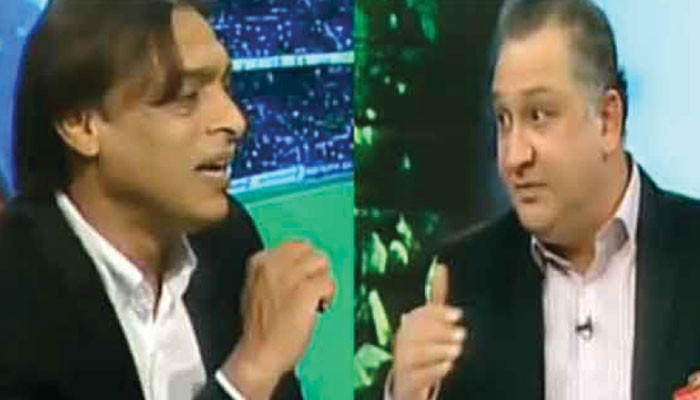 ISLAMABAD: Legendary former fast bowler said after the announcement of an inquiry into the incident of PTV Sports anchor Dr Noman Niaz and Shoaib Akhtar by the state broadcaster, he left the decision of right and wrong to his compatriots. Is.

In a message on Instagram, the former fast bowler said on Wednesday that Pakistan was his identity and he never let his country down.

Pakistan is my identity and I have never let my country down. I have given my blood and sweat for this country. I leave it up to my compatriots to decide between right and wrong, ”said Shoaib Akhtar.

Dr. Niaz, who also holds an executive position at Pakistan Television (PTV), forced Akhtar to leave the show because of his performance as Man of the Match Harris Rauf and his preparation as a world-class player. They were not talking. Bowler

It took place in front of foreign guest stars Viv Richards and David Gower, who are in Pakistan for their expert opinion on the ongoing T20 World Cup.

As Rauf played a match-winning role in the team’s victory over New Zealand, Akhtar praised the Lahore Qalandars’ player development program and its co-operation, which angered the host who kept Akhtar on his line. Wanted to

Akhtar gave the host a chance to apologize, which he refused to do, and forced him to leave the seat in the presence of well-known mega cricket stars.

“It was an unfortunate incident in which the host was offended. He insulted a national star on national TV for unknown reasons. He insulted me in front of international stars. I insulted him during the break. “Pakistan wanted to settle the matter for the sake of cricket and the image of the country but they were not ready to apologize. I had no choice but to resign and leave the stage.” I can no longer tolerate such insults, ”Akhtar said in a tweet.

Later, after a backlash, Dr. Niaz posted a message acknowledging that Akhtar is a star and no one is denying it, but did not apologize for his insulting behavior.

The incident is said to have brought the country and Pakistan cricket into disrepute. “I have never seen such a scene in my life,” Gower said after the controversy.

Former cricketers and politicians also came out in support of Akhtar, asking him to apologize to the PTV Sports anchor.

“Dr. Noman Niaz acted like a proud little boy on PTV last night. He should be fired and blacklisted. [the] The PTV screen will continue until he apologizes to everyone in the show, especially Shoaib Akhtar, ”he wrote on Twitter.