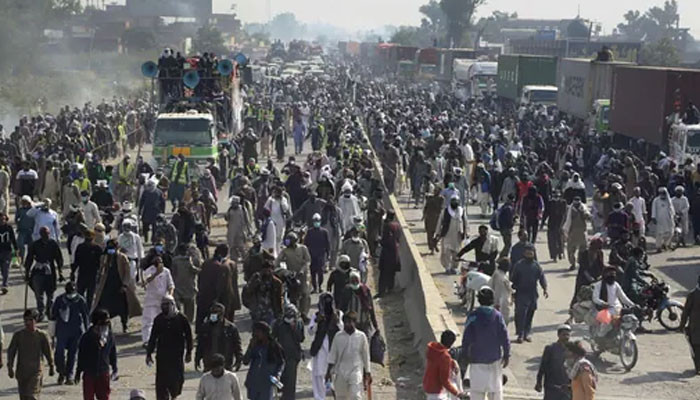 LAHORE: Pakistan Rangers have been deployed across Punjab to maintain law and order after the protest and sit-in of banned Tehreek-e-Lubaik Pakistan (TLP) workers entered its seventh day today (Thursday).

Activists of the banned outfit marching towards Islamabad have set up camp on the Kamoke section of the GT Road as they prepare to advance in their march.

Public and private educational institutions on GT Road and adjoining areas are also closed and internet service is suspended in Kamoke.

The government has dug a trench near Chenab Bridge on GT Road and placed containers, while the road from Wazirabad to Sialkot has been dug and the land route between the two cities has been cut off to allow protesters to proceed. To prevent growth. .

Meanwhile, the repair work of the ditches dug on the sadhuka section of the road could not be started.

Security has been tightened in Rawalpindi and Murree Road is completely closed for traffic while Rawalpindi Metrobus service is closed till further notice.

Five policemen were killed in the clashes.

The day before, the Pakistani government had announced its decision to declare the banned TLP a militant organization, with Interior Minister Sheikh Rashid saying the government had failed to maintain law and order in the province for two months. He had called Punjab Rangers. .

Addressing a press conference in Islamabad, the Home Minister had said that the government wanted to establish peace as there was a lot of international pressure on Pakistan.

“We have decided to call Rangers for 60 days to maintain law and order in the province,” Rashid said. “Like Karachi, the Rangers have been called to Punjab under Section 4 (2) of the Anti-Terrorism Act 1997, which has been read in conjunction with Article 147 of the Constitution of Pakistan.”

Since the beginning of the TLP protests, five policemen have lost their lives in the violence and countless police vehicles have been set on fire by the protesters.

“TLP is getting external support”

Meanwhile, Federal Minister for Planning and Development Asad Umar, while appearing in a Geo News program with Shahzeb Khanzada today, said that the state had tried for a long time to persuade the banned TLP through talks but the group did not. Resorted to violence.

He said there was evidence that the TLP had external support. The decisions taken by the government have been made in consultation with the army.

If all stand with Punjab Police then there is no need to call Rangers, Mustafa Nawaz Khokhar

Senator Mustafa Nawaz Khokhar asked how long the police and army personnel would continue to pay the price for the unwise policies of Islamabad and Pindi.

Just yesterday, ten brave young men of the security forces were martyred while fighting against religious extremists, the senator said, adding that two army and four policemen were martyred by the TTP in Khyber Pakhtunkhwa and four in Punjab.

“Even today, the solution to our problems lies in the implementation of the National Action Plan,” he said.

“Whenever religion and extremist groups are used for political purposes, the current situation is the result,” Khokhar said. He asked when our state and political parties will understand this.

“If everyone unites,” he said. [against the TLP protesters] And at that time there was no need to call Rangers to support Punjab Police.

He said that Punjab Police was fully capable of dealing with these protesters and controlling them, adding that they stood by Punjab Police personnel and officers in this difficult time.

The banned TLP extended its protest on 12 Rabi-ul-Awal. Initially, the banned group staged sit-ins in Multan and Lahore, after which a march towards Islamabad was announced.

Strict security arrangements have been made in Rawalpindi. Major highways connecting Islamabad and Rawalpindi have been sealed and Faizabad metro service has been suspended. There are reports of severe traffic jams on alternative routes and citizens are facing severe difficulties as it has become difficult to get to the hospital.