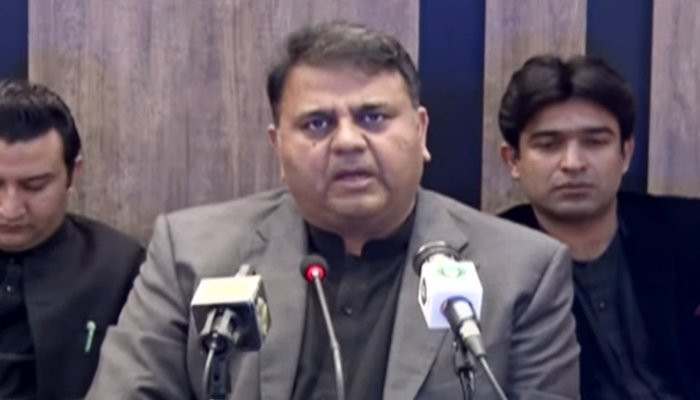 ISLAMABAD: Federal Minister for Information and Broadcasting Fawad Chaudhry on Friday warned the banned Tehreek-e-Libek Pakistan (TLP) that “no mob can compete with the state”.

Speaking after the National Security Committee (NSC) meeting, Fawad called on the protesters to end their protest and return home.

The government’s stern warning came in response to the martyrdom of four Punjab policemen and injuries to more than 400 policemen in clashes with miscreants.

“I am telling the protesters to return home. I am telling their families: call your people home. The state will not give up anything to prove itself,” Chaudhry said. He warned in a press conference later.

Chaudhry warned that “no mob can compete with the state”, as he warned that the government would take all possible steps to prevent any further mischief.

“The civilian and military leadership are like a fist on this issue,” he said.

The information minister said the state did not want bloodshed in the streets, and asked members of the banned organization to return home.

Chaudhry said the government would not accept any of the demands made through blackmail and said the state had also asked the Tehreek-e-Taliban Pakistan (TTP) to sit at the negotiating table.

The federal minister once again asked the protesters not to view the state as “weak”, reminding them that “Pakistan has already defeated terrorist organizations.”

The federal minister said the NSC was committed to backing the police force and the state would not tolerate this “ridicule” for long.

Meanwhile, the government commended the Punjab police for dealing with the banned organization’s protesters in a professional manner despite being directly targeted and causing casualties.

A statement issued by the NSC on Friday said the state’s tolerance should not be seen as a “sign of weakness”.

Top leadership in the security huddle

The NSC statement came after a meeting chaired by Prime Minister Imran Khan today. B, FIA DJs and senior officers were present. Civil and military officers

According to the statement, the NSC was given a detailed briefing on the internal security situation in the country and the ongoing movement by the banned TLP.

It is said that during the briefing, the Prime Minister stressed that no group or institution will be allowed to use violence to disrupt the public or put pressure on the government.

Taking serious note of the unprovoked and sometimes deadly attacks by TLP members, the committee vowed not to tolerate further violations by the banned group.

Stressing that the government recognizes the right of all Pakistanis to protest peacefully, the committee members agreed that the TLP was deliberately trying to destabilize the country by invading public property, state officials and civilians. “Violence is being used and will not be tolerated,” the statement said.

The participants condemned the “misuse of religion by the TLP for political gain and the issue of blasphemy”, which they said was aimed at misleading citizens and creating internal strife in society.

The statement said the TLP’s violence has furthered the agenda of “sectarian elements and external enemies of the state”.

During the meeting, it was pointed out that despite the overwhelming majority of more than 1.5 billion Muslims globally, there has never been such a violent protest in any other Muslim country to show immense love and respect for our Prophet.

The participants were reminded that the TLP has resorted to violent agitation on the streets on several occasions since 2017 and each time made unrealistic demands, just to gain political power, the statement said.

“In this process, the TLP’s actions have, in addition to causing public unrest, causing severe economic damage to the country, have emboldened other terrorist organizations seeking to challenge the state’s writ,” the statement said.

The committee unanimously decided to protect its sovereignty from all internal and external threats and not to allow the TLP to challenge the state writ in any way.

Participants endorsed the government’s decision to negotiate with the group within the law, without offering leniency for any offenses committed by TLP operatives.

Confirming the position of the committee, the Prime Minister directed that all necessary steps be taken to ensure the implementation of the law and the protection of the interests of the state and the people.

Negotiations with TLP not closed yet

Speaking to media after attending the NSC meeting, Home Minister Sheikh Rashid Ahmed had said that the doors of talks with the banned TLP were not closed yet but the state writ would be ensured at all costs.

The Home Minister said that he wanted to resolve the issue amicably.

Rashid said it was the government’s responsibility to protect people’s lives and property.

“[Federal Minister for Religious Affairs] Noor-ul-Haq Qadri and I will hold talks with the banned TLP.

The Home Minister asked the protesters to clear the roads, warning them that if the issues were not resolved amicably, the matter would no longer be under their control.

Replying to a question on the demands of the banned TLP, Sheikh Rashid said that a resolution has been tabled in the National Assembly.

Protests by members of the banned group entered its eighth day today (Friday), with protesters camping in Kamoke for the past two days.

Initially, the banned group staged sit-ins in Multan and Lahore, after which a march towards Islamabad was announced.

Security forces cordoned off major roads to prevent protesters from reaching Islamabad, even digging trenches in some places to stop the advancing crowd.