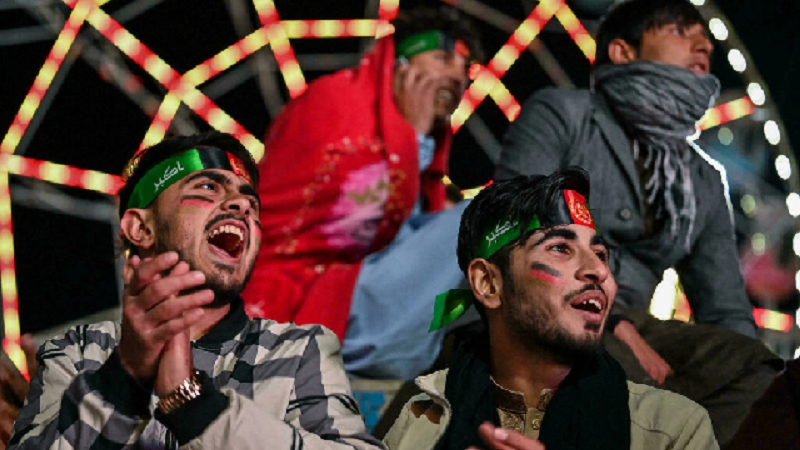 Afghanistan’s new Taliban government was clear to cricket fans before the expected clash with neighboring Pakistan on Friday.

An Interior Ministry spokesman said the national team should be celebrated in every possible way, but added: “If you win, you should not shoot in the air.

Qari Syed Khosti tweeted, “If you shoot in the air, you will be severely punished.”

In the end, despite the reliable performance of Afghan batting, Pakistan won by five wickets.

And there were no guns or gunfire in Habibullah Zazai Park, a hill station on the outskirts of eastern Kabul.

There, thousands or more spectators gathered to watch the T20 World Cup match, shining on a big screen from Dubai, the mood was passionate and realistic.

Under a bright ferris wheel, he led Afghanistan to 147 for six with a superb batting partnership between captain Mohammad Nabi and all-rounder Gulbuddin Naib.

During the day, the 90-acre park, with its scenic food stands, “9D” cinema and children’s rides, is a haven for families away from Afghanistan’s crisis.

On Friday night, an all-male mob competed on a cold night to thunder on their team.

Afghan cricket fans gather at an amusement park on the outskirts of Kabul, wearing their national colors instead of white and black Taliban banners. Photo: AFP

“You know the situation in Afghanistan, it’s very depressing,” admitted Abdul Wahab, 25, who runs a medical center in Kabul.

“Cricket is the only excuse to forget everything.”

Afghanistan had easily beaten Scotland in the opening match of the World Cup last week, but Pakistan’s match had a special echo.

Many Afghans learned to love sports in Pakistani refugee camps during the decades-long war in their homeland.

Now he is excited to compete at the next level with the cricket powerhouse at the highest level.

“For me, Afghanistan is the best because they are new to cricket,” Wahab told AFP as fans welcomed another boundary from their batsmen.

“We have been playing for 10 to 15 years, Pakistan over 100. They have more experience of cricket, even playing them is a source of pride for us.”

During the previous Taliban regime in Afghanistan between 1996 and 2001, many forms of entertainment were banned – such as music – but not men’s cricket.

And now that the Taliban are back, having taken over Kabul from the former US-backed government in August, they are still supporting it.

The park’s manager, Abdullah Ghaffar Hatifa, said AFP The new government has taken a hand-off approach, and Afghans from all walks of life are welcome to come out.

One possible source of tension is for fans to use the Afghan national flag – a black, red and green tricolor – instead of the Taliban’s white banner.

But whatever the future plans of the new government, all fans agree, as one told AFP: “This is our national flag … they have no right to interfere.”