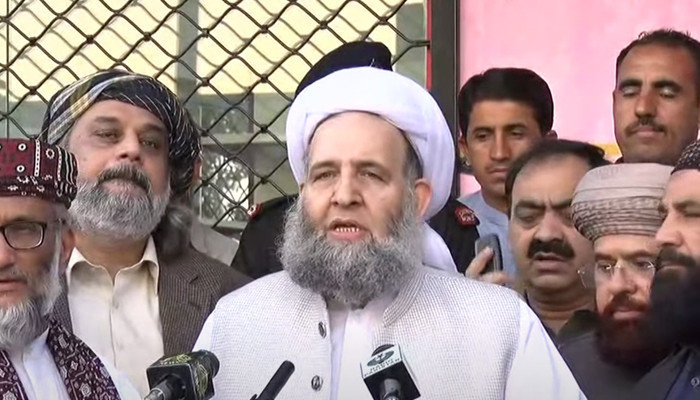 ISLAMABAD: Minister for Religious Affairs and Inter-Faith Harmony Pir Noor-ul-Haq Qadri on Saturday said that a 12-member committee has been formed to act as a negotiator between the government and the banned Tehreek-e-Libek Pakistan (TLP). ۔

Speaking to the media after attending a meeting of government and Barelvi schools of thought, chaired by Prime Minister Imran Khan, Qadri said the committee was holding talks with the government as well as leaders of banned organizations. Is. Organization

The Federal Minister said that religious leaders from across the country met the Prime Minister and expressed their determination to resolve the issue peacefully.

Qadri said that the Prime Minister told the participants that the present government has always welcomed meaningful and serious dialogue.

The Federal Minister said that the Prime Minister also told the scholars that their suggestions, which could save the country from bloodshed, would also be considered.

“The 12-member committee is in talks with the TLP leadership, and we hope they can move forward. [in their negotiations with the proscribed political party]”They said.

Earlier in the day, a delegation of clerics arrived at the PM’s private residence in Bani Gala, the report said.

For his part, Sahibzada Hamid Raza, president of the Sunni Ittehad Council (Faisalabad), said the prime minister had assured the participants that the government would not use “violence” to quell the protests.

Raza said the prime minister had told the meeting that he did not want to see bloodshed in the country, but noted that “no compromise will be made when it comes to state writs.”

“We urge the protesters not to resort to violence. […] As talks continue in different parts of the country, “said the SIC president.

Asked if the protest was a constitutional right, Raza said the protesters should stay there and not move forward as it could sabotage the talks.

“Wait a little longer because you have already waited so long,” he told protesters.

Raza declined to go into details about the talks, saying they could lead to confusion.