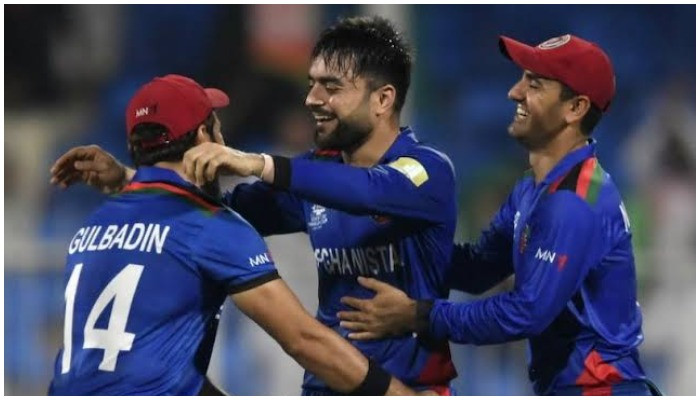 Abu Dhabi: Afghanistan defeated Namibia by 62 runs in Abu Dhabi on Sunday for their second victory in the T20 World Cup.

Batting first, Afghanistan made it 160-5 and former captain Asghar Afghan said goodbye with 31.

He then held Namibia to 98-9 as Seamers Hamid Hassan, who played his first T20 international in five years, and Naveenul Haq both took three wickets.

Naveen was declared the best player of the match but he presented his award to former captain Asghar who announced at the game that he would retire after that.

The opener scored 45 off 33 balls with the help of two sixes. After JJ Smith’s dismissal in the Deep Square League, opening partner Hazratullah Zazai quickly added a pair of sixes in his 33rd over.

When Asghar came to bat, the game stopped for a while and Namibia stood in line and greeted him with applause.

Asghar scored 31 off 23 balls with the help of three fours and a six.

After 33-year-old Robin Tripleman was dismissed in the last ball of the 19th over, another break occurred when the Namibian players ran across the field to shake hands as he walked away.

Captain Nabi scored an unbeaten 32 off 17 balls with the help of a six and five fours which took his team to 160 on the last ball.

After the innings, an emotional Afghan spoke in an on-field interview about his decision to retire from the middle of the tournament, saying he made the choice after Friday’s defeat by regional rivals Pakistan.

“We were hurt a lot from the last match and that’s why I decided to leave the stage,” he said. “It’s very difficult to explain, but I had to retire.”

“I wanted to give young people a chance,” he said.

Asghar led Afghanistan in all three formats of cricket. He played six Tests, 114 ODIs and this was his 75th T20 International in his 12-year career.

The ICC has sent a press release saluting Asghar.

“Asghar has been a great ambassador for the game and has been instrumental in raising Afghanistan’s profile in world cricket,” said Geoff Allardyce, acting ICC chief executive.

Afghanistan made a change to the losing team from Pakistan, replacing the injured spinner Mujeeb-ur-Rehman with Hamid Hassan for the first time in five years.

This change resulted in the loss of the Seamers of Afghanistan for once.

Naveen paid tribute to Asghar, who left after the victory, which kept Afghanistan looking for a place in the semi-finals.

“He was the best captain in Afghanistan,” he said. “I want to dedicate this man of the match to my last match.”

“We will miss him very much.”