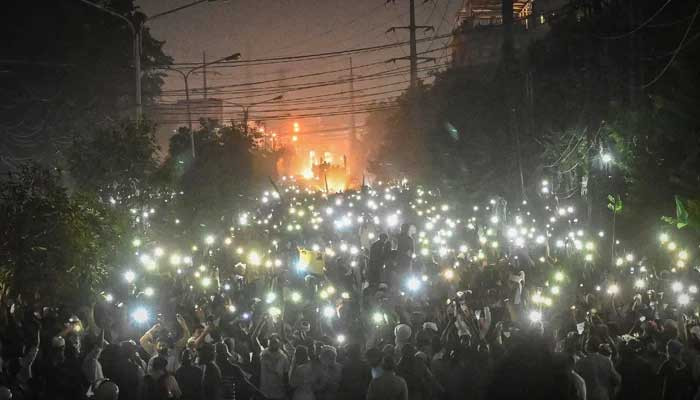 ISLAMABAD: The banned Tehreek-e-Lubaik Pakistan (TLP) will end its sit-in tonight (Sunday) as per its agreement with the government, Geo News reported on Friday.

Sources told Geo News that the banned outfit has agreed to end its long march and sit-in and has also agreed to participate in mainstream politics in the future.

On the other hand, the government has agreed to release all the arrested activists of the banned organization, while those detained for terrorism and other serious crimes will have to seek relief from the courts.

Sources said that the banned organization would end its sit-in tonight and as a result the government would not take any action against the protesters.

Mufti Muneeb-ur-Rehman, former head of the Ruwit-e-Hilal Committee, has agreed to act as a guarantor for the TLP, while Foreign Minister Shah Mehmood Qureshi, National Assembly Speaker Asad Qaiser and Minister of State for Parliamentary Affairs Ali Muhammad Khan signed the agreement. Have signed TLP from the government.

An agreement was reached between the TLP and the government.

Officials from the PTI government’s negotiating team held a press conference on Sunday to update the public on their talks with the banned TLP.

Foreign Minister and Speaker National Assembly Asad Qaiser was present on behalf of the government while Mufti Muneeb-ur-Rehman was also present at the press conference.

Initiating a news conference in Islamabad, Rehman said talks with the banned TLP had been “successful” and an “agreement” had been reached.

He said that the agreement reached with the government was not a victory or defeat of any one individual but a victory of Islam and Pakistan.

Rehman said a steering committee has been formed under the agreement, which will be headed by Minister of State for Parliamentary Affairs Ali Muhammad Khan, while TLP Mufti Ghulam Ghaus Baghdadi will join the committee. He said that the committee would start its work from today.

“Detailed talks were held between the Government of Pakistan and the TLP under an atmosphere of mutual trust, and an agreement has been reached between the two sides,” Rehman said, adding that the talks did not take place under any pressure or atmosphere. ۔ Stress