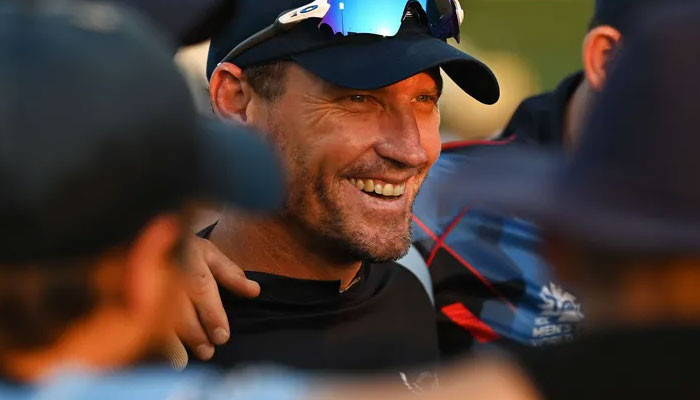 Abu Dhabi: Namibia coach Pierre de Bruyne on Tuesday praised his inexperienced team despite the defeat against Pakistan in Abu Dhabi, saying they had “tested” their opponents.

Pakistan won by 45 runs – its fourth win in as many matches to become the first team from Group 2 to reach the semi-finals of the Twenty20 World Cup.

Pakistan scored another unbeaten 79 off 50 balls by Mohammad Rizwan and 70 off 49 balls by captain Babar Azam as the duo helped to score 189-2 in 20 overs.

Namibia scored 144-5 in their 20 overs in which David Weiss scored 43 not out and Craig Williams 40 runs.

De Bruyne said his team has learned a lot from playing in the Super 12 stage.

“We will take the lessons we have learned,” de Bruyne said. “We played 40 overs of cricket. And there were stages where we tested them. They were, after 10 overs, they had 59 runs on the board.”

The Namibian bowlers performed brilliantly as left-hander Robin Trumpman bowled the first over but Pakistan were bowled out for 130 in the last ten overs.

“And we will take everything with us. It has given us the experience and information that we need to develop as a team. So we are very happy with that performance.”

Facing two tough rivals in their next games – India and New Zealand – De Bryan expressed hope that his team would emerge.

“We’re focusing on ourselves. We’re learning a lot from this experience. We’ve learned a lot tonight. I thought it was great – well, it’s the Namibian team’s bat and ball. Had an excellent performance with.

“We know what’s going to happen. India and New Zealand, and they have – they have to win properly to get to their final stages.”

Namibia has one win in three matches. They beat Scotland by four wickets but lost to Afghanistan.