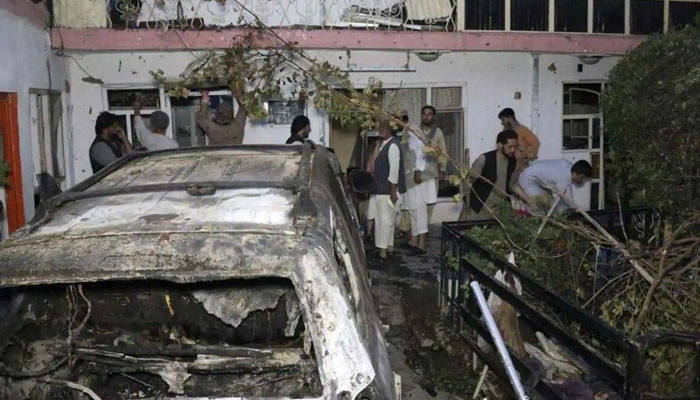 WASHINGTON: A US drone strike in Kabul in August that killed 10 Afghan civilians was a tragic mistake but did not violate any law, a Pentagon inspector general said Wednesday after an investigation.

The August 29 operation killed three adults, including a man working for a US aid group, and seven children, targeting a house and a vehicle seized by Islamic State militants. ۔

“The investigation did not find any violations of the law, including the laws of war,” said Lt. Gen. Sami Saeed, inspector general of the U.S. Air Force.

“It was an honest mistake,” Syed told reporters at the Pentagon.

“But this is not criminal behavior, random behavior, negligence,” he said.

Syed said those directly involved in the attack, which took place during the US-led evacuation of tens of thousands of Afghans after the Taliban took over the country, truly believed that “they were the target of an impending attack.” have been.”

“The intended target of the attack, the vehicle, its contents and the occupants were considered a real threat to US forces and missions at Hamid Karzai International Airport at the time,” the report said.

However, it said that the interpretation of the intelligence and the observations of a targeted car and its occupants for more than eight hours were “sadly incorrect”.

“What was possibly broken was not intelligence, but intelligence belonging to a particular house,” Syed explained.

After a preliminary investigation, the Pentagon admitted on September 17 that it was a “tragic mistake” and promised to pay compensation to the surviving family members.

Syed explained that one point of failure or no one was blamed for the mistake. He also said that it was not his responsibility to decide whether anyone should be punished for wrongdoing.

The U.S. military had intelligence that IS militants were planning a new attack on evacuation operations. Three days later, a suicide bomber at the airport killed 13 U.S. soldiers and several Afghans.

Intelligence pointed to a white Toyota Corolla. The car is believed to have contained explosives, as used in the previous attack.

But one mistake, Syed admitted, was that he chased the wrong car.

“We never really stopped tracking the Toyota Corolla,” he said.

“We haven’t picked up the Toyota Corolla yet, which we think we should have picked up.”

He also said that the people involved in the operation thought that the house at the target was empty.

“They were sure there were no children in the compound. It turned out to be wrong,” he said.

None of the operatives saw a child enter the target area just two minutes before the rocket fire.

The operation was given for “verification bias” – a tendency to make decisions on what to expect.

U.S. officials believe the bomber struck shortly after noon in front of a U.S. military base.

Because of this, when the analysts who planned the US attack saw people exchanging computer bags, they became more convinced that they had the right target.

“As it turns out, and we can confirm that, it was a computer bag,” said Syed, not the explosives.