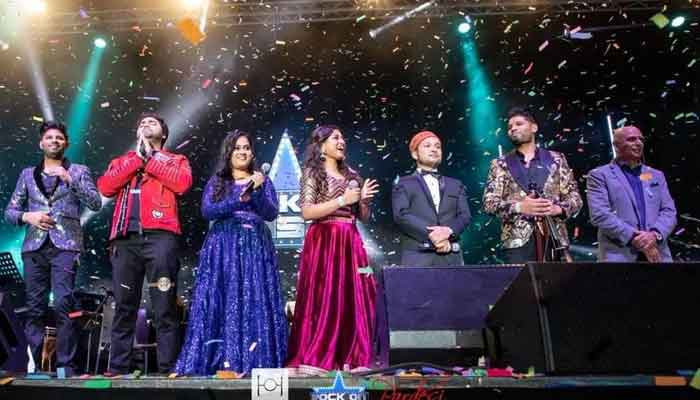 The show lasted for more than three hours as the artists sang songs that made them famous in the nationwide competition.

The best was left to the last as Rock On Music asked the Leo Twins to close the show with their solo performances and then the combined performances of all the artists for the fusion set.

The Magnificent Four sang popular Urdu and Hindi numbers with a live band for about 8,000 Indian and Pakistani audiences in North London, while Leo Twins performed with his guitar, violin and other percussion instruments.

The Rawalpindi twins started with their own version of Ertugrul’s famous soundtrack. The opening performance lasted about 8 minutes – setting the tone for the full energy performance.

The four Indian artists, who have been hailed by big names in the Bollywood industry as tomorrow’s superstars, then joined the ranks of Pakistani artists.

Leo Twins provided rhythm with the guitar and mesmerized the audience with some standard violin music while the four artists sang live, giving the show a new edge and sound.

The audience danced non-stop for half an hour as the famous musical duo performed in a powerful and sarcastic final with young artists. He concluded the concert with Qalandar Ali’s number one and Jay Ho.

Ahead of the show’s tour of the UK in London, Leicester and Birmingham, the artists told a press conference that they were grateful to great legends such as Ustad Nusrat Fateh Ali Khan, Ayesha Bhunsle, Muhammad Rafi and others whose music brought them up. چڑھے۔ And learned to sign by practicing.

Hassan Zubair, the international organizer of Leo Twins, said: “I am very grateful to Rock on Music and Mr. Vijay Bhola for giving Leo Twins such a great opportunity, to see the talents, music, passion of Leo Twins and like it. The style of their instrument.

“This is the first time he has given a solo performance on a stage that every singer dreams of performing at Wembley Arena.”

He said that Leo Twins will soon perform in O2 Indigo.