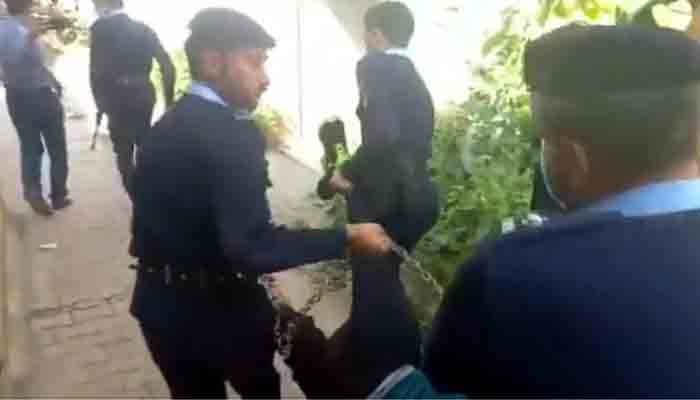 ISLAMABAD: Another case has been registered against Zahir Jaffer, a key accused in the Noor-e-Muqadam murder case, for attacking police personnel and using obscene language in court.

A local court in Islamabad kicked Zahir out of the courtroom during a hearing on Wednesday for repeatedly using abusive and vulgar language.

A new case was registered against Zahir by SHO Inspector Ghulam Mustafa Kayani of Margalla police station, alleging that Zahir had violated court rules by using obscene language in the courtroom.

Zahir grabbed the collar of a police officer when police tried to take him out of the courtroom following a court order issued on his conduct, read the first information report.

It further said that the accused tried to commit suicide and hit himself on the head to escape and injured himself.

Zahir Jaffar was kicked out of the courtroom for using obscene language.

During the hearing in the District and Sessions Court of Islamabad, forensic sketch artist Amir Shehzad recorded his statement in the case.

He told the court that he had accurately mapped out the crime scene of Noor Muqaddam’s murder. Additional Sessions Judge Ata Rabbani heard the case.

Zahir Jaffer, the main accused in the murder case, tried to interrupt the hearing again and started shouting “Hamza, Hamza” in the court room. “This is my court and I have something to say,” he shouted, ignoring the courtroom decor.

Despite the warning, Zahir continued to use inappropriate language in the courtroom. The court, meanwhile, directed police to remove him, but Zahir grabbed a police inspector by the neck as he tried to comply with a court order.

Except for Zahir’s lawyer, everyone else cross-examined the forensic artist.

Earlier, Zahir Jaffer, the main accused in the October 14 murder of Noor Muqaddam, was formally indicted by an Islamabad court.

In addition to Jaffar, Tahir Zahoor, the chief executive officer of Therapy Works, was indicted along with two employees of the family – Jamil and Jan Mohammad.

Additional Sessions Judge Ata Rabbani had indicted a total of 12 persons in the case, six of whom were brought to the court from Adiala Jail in Rawalpindi. The other six were previously granted bail. All the accused have not pleaded guilty.