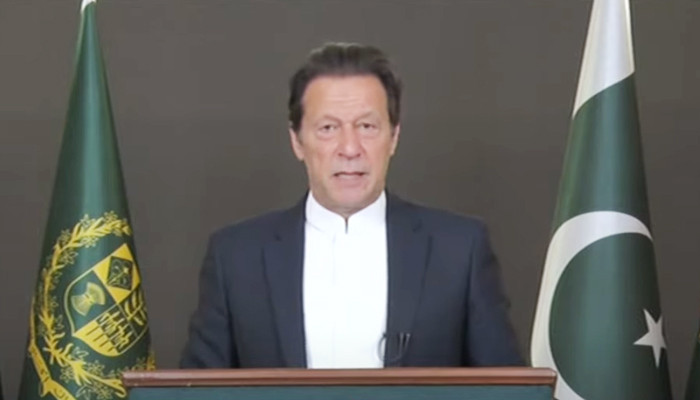 ISLAMABAD: Prime Minister Imran Khan on Wednesday announced a “historic welfare package” of Rs 120 billion, as the government’s aim is to reduce inflation and provide relief to the people.

Addressing the nation, the Prime Minister said that keeping in view that the people of the country are going through difficult times due to inflation, the government is introducing a package for 20 million families, which will benefit 130 million Pakistanis. Will arrive

“It [poverty alleviation] The package, worth Rs 120 billion, will be presented to Pakistanis by the federal and provincial governments.

The Prime Minister announced that under the package, citizens would be able to get 30 per cent discount on three basic food items including ghee, wheat and pulses under targeted subsidy.

The Prime Minister thanked China and Saudi Arabia for their financial support to Pakistan and said that if the country had defaulted on the International Monetary Fund (IMF), the rupee would have depreciated further and inflation would have skyrocketed.

The Prime Minister also highlighted the situation of Corona virus around the world and said that unlike other countries, the Pakistani government had taken strategic decisions regarding the implementation of lockdown and prevented the closure of factories and agricultural activities were going on as usual.

“[Due to the government’s policies]Cotton production increased by 81%, while the country witnessed record sales of motorcycles and tractors.

“Urea was used 23% more by farmers, which shows that conditions are improving. And when farmers are happy, production increases, and in return, it benefits the country. ,” They said.

“Projects worth Rs 600 billion are under construction in the construction sector, as we had encouraged it,” he said, adding that large-scale manufacturing in the industrial sector has increased by 13 per cent – more money and more in the country. There are jobs.

“We had. [allowed] Construction industry to work; We tried to protect our exports in such a way that if they stopped, the dollar would rise against the rupee.

Talking about the increase in profits of many industrial sectors, he said that their profits in engineering increased by 350 per cent, textiles by 163 per cent, cars by 131 per cent, cement by 113 per cent and oil and gas by 75 per cent.

The Prime Minister said that the information and technology sector has grown by 47% while it is expected to grow by 75% this year. “It’s a good thing for our youth.”

“Our policies have prevented the economy from collapsing,” he said.

‘Yes, we are facing inflation’

Talking to the media about the ongoing inflation in the country, he said that they have the right to criticize the government but they should adopt a balanced attitude while reporting on inflation.

Citing the example of Turkey, Germany, China and the United States, the Prime Minister said that after 2008, these countries also faced historic inflation.

“Yes, we are facing inflation in the country but you should also look at what the government is doing to reduce the situation,” he said, adding that the factors that are beyond the control of the government are the reason. Will have to increase petrol prices. To be further enhanced.

Earlier, Federal Minister for Information Fawad Chaudhry had revealed that Prime Minister Imran Khan would announce “the biggest relief package in the history of the country” in his address to the nation today.

Taking to his official Twitter handle, the minister reiterated that the prime minister’s first priority is to alleviate the suffering of the people and he will go to any lengths to provide relief to them.

“This package will be a milestone in alleviating people’s hardships and making their lives easier,” he added.

Earlier on Tuesday, sources told Geo News that the Prime Minister is expected to take the nation into confidence over the secret agreement reached by the government with the banned Tehreek-e-Libek Pakistan (TLP).

Addressing a press conference in Islamabad at the end of the day, Chaudhry had said that the Prime Minister would also take the nation into confidence about the government’s economic policies in his televised address.

The development came as the government began implementing a secret agreement with the banned organization, which reportedly released more than 800 supporters of the group across Punjab.

The Prime Minister called on the coalition parties.

In a meeting with the ruling coalition on Tuesday, the prime minister took lawmakers into confidence over the deal with the banned TLP.

The participants of the meeting considered convening a joint sitting of Parliament. According to sources, the coalition partners had also assured the Prime Minister that they would stand on one page on important national issues.