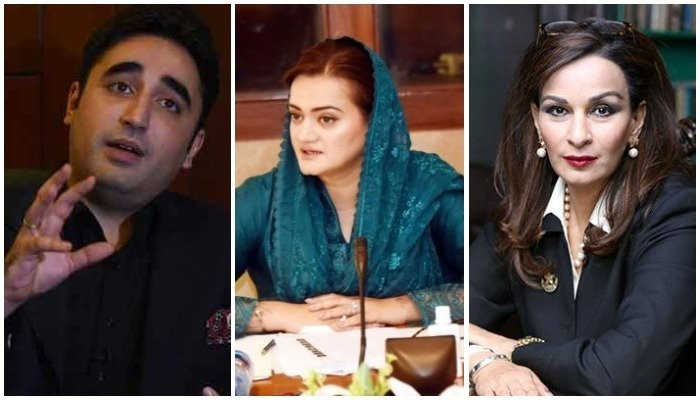 Opposition leaders criticized Prime Minister Imran Khan’s Rs 120 billion aid package, which was immediately announced by the Prime Minister in his address to the nation on Wednesday for 20 million extremely vulnerable families in Pakistan.

The opposition called the move “an acknowledgment of the government’s failure” and “nothing but a joke.”

PPP chairman Bilawal Bhutto Zardari shared a picture on Twitter showing the percentage increase in prices of some items.

He wrote that the Prime Minister’s package is too small for 200 million people.

“The Prime Minister’s package is nothing but a joke. The Prime Minister claims that a few families will benefit from a 30 per cent discount on ghee, flour and pulses for only six months. Ghee has increased in three years. [by] 108%, flour 50% and gas 300%, “he wrote,” 30% is too low, too late for the 200 million people who are facing historic inflation, poverty and unemployment, “Bilawal wrote.

On Twitter, Rehman criticized the prime minister for naming him “Blame Munster” because he blamed former governments and international markets for the rise in prices of oil, gas and other essential commodities. have been. Accessories.

He continued: “Basically he did not take any responsibility for the economic crisis, skyrocketing inflation, unprecedented public debt, falling rupee and just said ‘get ready for more price hikes’.” And oh, the ‘relief package’ for 20 million of the 22 million people, which package? The price of ghee went up as he spoke. “

Meanwhile, PML-N leader and former Sindh governor Muhammad Zubair said the offer of a subsidy on the product was a “confession of failure” that the government could not control prices.

In conversation with Zubair Geo.tv. He said that it seemed that it was August 2018 when Imran Khan had just come to power and he was announcing the implementation of his plan for the economy.

“They must have forgotten that this is the time of their return, not the time when they took office,” Zubair said.

Talking about the subsidy announced by Prime Minister Imran Khan, Zubair said that the price of the concession given to the people would have to be paid by someone.

“Ultimately, the government will meet this by raising taxes or borrowing more or printing more notes, which will increase inflation,” he said.

Zubair admitted that prices have gone up in the international market but the Prime Minister should have clarified that every country in the region is importing the same items that Pakistan is importing.

Zubair asked why Pakistan is most affected in terms of overall inflation.

He said there was only one justification and reason behind inflation in Pakistan and that was the government’s “incompetence, unprofessionalism and lack of ability to deliver”.

Referring to Prime Minister Imran Khan’s comparison of Pakistan with India on petrol prices, Zubair said the Prime Minister should have kept in mind the per capita income gap.

Meanwhile, PPP leader Shazia Murree said that Prime Minister Imran Khan was forced to address the nation as opposition parties were holding protests along with citizens.

“People are being killed economically,” he said.

Murree said there had been a historic rise in unemployment and inflation in Pakistan and a historic fall in the value of the rupee, adding that today’s speech was a forced one where Prime Minister Imran Khan “tried to make excuses”.

He said that 68% families in Pakistan are unable to afford basic food items.

Like other party leaders, Ameer Jamaat-e-Islami Syed Sirajul Haq said the prime minister “did not present the facts correctly in his speech.”

Haq wrote on Twitter that if you want to compare inflation with the United States and Europe, mention the facilities available to the people of these countries. Inflation and unemployment are higher in Pakistan. [other countries] In the area. The government’s boat is sinking and it is responsible.

Addressing the nation, the Prime Minister said that keeping in view that the people of the country are going through difficult times due to inflation, the government is introducing a package for 20 million families, which will benefit 130 million Pakistanis. Will arrive

The Prime Minister further said that the government has asked the construction sector to increase the wages of the workers, while the health insurance program will be introduced in Punjab from December.

“Under the package, four million families will be able to build interest-free homes,” the Prime Minister added, adding that Rs. To do And the development of 3.7 million households across the country.

In his opening remarks, the Prime Minister thanked China and Saudi Arabia for their financial support to Pakistan and said that if the country had become a defaulter, the rupee would have depreciated further and inflation would have skyrocketed.

The Prime Minister also highlighted the situation of Corona virus around the world and said that unlike other countries, the Pakistani government had taken strategic decisions to implement lockdown and prevent factories from closing down and agricultural activities to continue as usual.

“[Due to the government’s policies]Cotton production increased by 81%, while the country witnessed record sales of motorcycles and tractors.

“Urea was used 23% more by farmers, which shows that conditions are improving. And when farmers are happy, production increases, and in return, it benefits the country. ,” They said.

“Projects worth Rs 600 billion are under construction in the construction sector, as we had encouraged it,” he said, adding that large-scale manufacturing in the industrial sector has increased by 13 per cent – more money and more in the country. There are jobs.

“We had. [allowed] Construction industry to work; We tried to protect our exports in such a way that if they stopped, the dollar would rise against the rupee.

“Our policies have prevented the economy from collapsing,” he said. “The World Bank, the World Health Organization, and the World Economic Forum have all praised our policies on epidemics.”

‘Petrol prices will go up further’

Talking to the media about the ongoing inflation in the country, he said that they have the right to criticize the government but they should adopt a balanced attitude while reporting on inflation.

Citing the example of Turkey, Germany, China and the United States, the Prime Minister said that after 2008, these countries also faced historic inflation.

“Yes, we are facing inflation in the country but you should also look at what the government is doing to reduce the situation,” he said, adding that the factors that are beyond the control of the government are the reason. Will have to increase petrol prices. To be further enhanced.

“Oil and ghee prices have doubled worldwide, and since we import these items, what can we do about the prices?” They said.