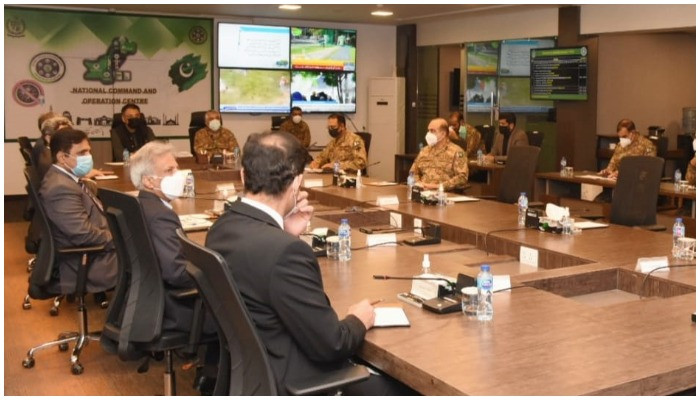 ISLAMABAD: The National Command and Operations Center (NCOC) meeting on Thursday to review the progress of vaccine administration across the country said that a total of 108 million people across the country have been vaccinated. Is gone

A comprehensive future vaccine strategy was presented to the forum, with special emphasis on the mandatory vaccination system.

Meanwhile, the NCOC commended all the federation units for facilitating population reach and administering the necessary vaccines. He expressed satisfaction over the implementation of Non-Pharmaceutical Interventions (NPIs) as well as the National Immunization Management System.

Furthermore, the forum appreciated the approach to controlling epidemic diseases in various fields, especially regarding the implementation of NPIs in mosques and the role of scholars in ensuring communication on immunizations.

Asad Omar, head of the NCOC and Minister for Planning, said on Thursday that 48% of the population had received at least one COVID-19 job.

On Twitter, the minister praised the Punjab government for leading the vaccination campaign from other provinces.

Omar said more than half of Punjab’s population has received at least one coronavirus vaccine.

He tweeted, “Punjab has become the first province with more than half of the population having at least one food with 52%.”

In Khyber Pakhtunkhwa, the federal minister revealed that 48% of the population had received at least one dose of COVID-19. He said that 40% of the population of Sindh and 17% of Balochistan have been partially vaccinated so far.

He added that “Federal Territory of Islamabad is leading in vaccination with 87%, AJK 59% and GB 54%.” Overall, 48% of Pakistan’s population has received the first dose of the vaccine, the minister said.

Earlier on October 31, the National Command and Operations Center (NCOC) decided to lift all restrictions on CoV 19 from cities where at least 60 percent of the population had vaccinated themselves against the disease. ۔

The decision was taken after a meeting of the NCOC chaired by Federal Minister for Planning, Development and Special Measures Asad Omar reviewed the progress of the vaccination campaign in various cities.

In its statement, the NCOC named Islamabad, Mandi Bahauddin, Gilgit and Mirpur as the “best cities” for vaccinating 60 per cent of its population.

Rawalpindi, Skardu, Hunza, Peshawar, Jhelum and other cities were declared “vaccinated” because 40% to 60% of the population in the cities has been infected with the corona virus.

With a 60% vaccination rate, all restrictions on the virus in cities such as weddings, social gatherings, business, indoor dining and sports activities were lifted. All public transport will be allowed to operate in these cities with a 100% occupancy rate.