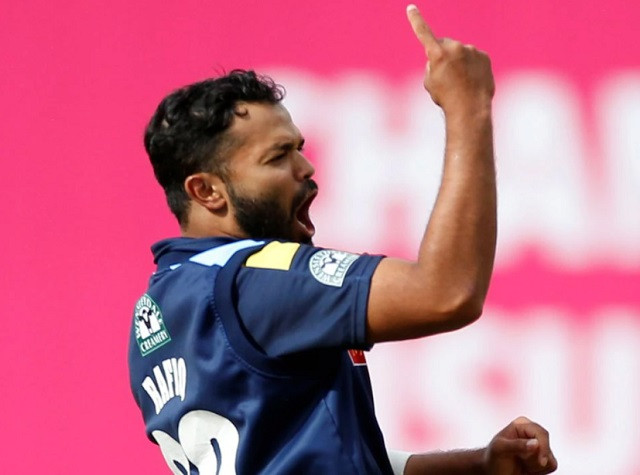 Pakistan-born cricketer Azeem Rafique has called for major changes to his former English county club Yorkshire and revealed that he is still being abused because of racism.

Yorkshire offered the 30-year-old off-spinner a “deep and insecure apology” in a report on his allegations of racial abuse in September.

But last week the county said it would not take disciplinary action against any staff, sparking a wave of criticism and persuading sponsors to turn their backs on the club.

Rafiq said the row was about “institutional racism and the failures of several leaders at the Yorkshire County Cricket Club and the wider game.”

“The sport I love and my club is in dire need of reform and cultural change,” he posted on Twitter. “Changes in the system and environment that will formally educate and bring a new generation that make it a beautiful sport.”

The controversy has erupted alongside British Prime Minister Boris Johnson and the governing body, the England and Wales Cricket Board (ECB).

Johnson stepped up pressure on the ECB on Thursday when his spokesman told reporters: “The prime minister is clear that racist language should never be used in any context.

“These are serious allegations. They should be thoroughly and swiftly investigated. We urge the ECB to look into this.”

Rafiq, Yorkshire chairman and county chief executive and director of cricket, has been summoned to testify before a parliamentary committee on November 16.

Yorkshire reportedly called an unscheduled board meeting on Friday to discuss leaving the queue.

Former England international Gary Balance has admitted using racial slurs against Rafiq during a time together in Yorkshire, saying in a statement on Wednesday: “I’m sorry I used that word in my younger years. Used in immature conversions.

Also read: Dembele offers a ‘sincere apology’ for the storm of racism.

“I have to make it clear that this was a situation where best friends said offensive things to each other that would be considered completely inappropriate, out of context.”

However, Rafiq said on Thursday that despite condemnation of his treatment in Yorkshire, he had been abused.

“We wonder why people don’t come forward. Even after everything happens, it looks like personal attacks are happening. What a tragic situation,” he said.

Balance’s entry came after the publishing company Emerald terminated its affiliation with Headingley Grounds in Yorkshire and Leeds after handling a report in which Rafiq was accused of “racial harassment and bullying” at the club. Other sponsors follow suit.

Rafiq, who represented Yorkshire in two spells between 2008 and 2018, made 43 allegations and said his treatment at the club had led him to suicidal thoughts.

Yorkshire’s revised report upheld seven of their claims but concluded that the club was not institutionally racist.

He told ITV: “They have not taken the great friend and his well-being seriously. They have called it a joke in a way that makes me anxious.

“The word ‘P’ is a racist term and should not be expressed under a banner bracket.

“Yorkshire felt that Azeem’s allegations were not important to them. They avoided problems and delayed the report.”