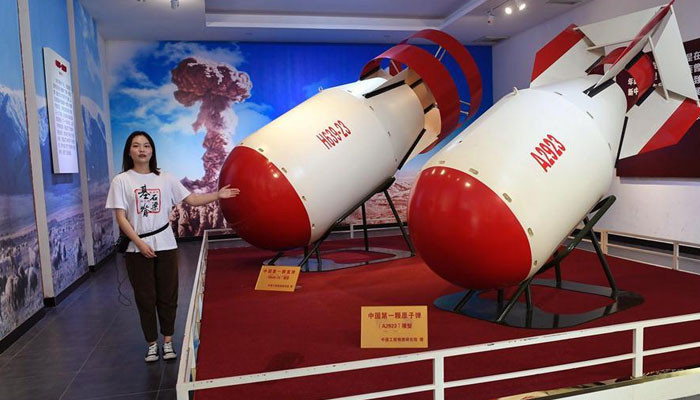 Washington: Beijing is expanding its nuclear arsenal faster than expected, narrowing the gap with the United States, with the Pentagon saying China could have 1,000 nuclear warheads by 2030.

In a report, the Pentagon said Wednesday that China could have 700 nuclear warheads by 2027, and 1,000 by 2030 – two and a half times the size of the weapons the Pentagon did just a year ago. Was Reports.

The People’s Republic of China (PRC) is “investing and expanding the number of its land, sea, and air-based nuclear delivery platforms and building the necessary infrastructure to assist in this massive expansion of its nuclear capabilities.” ۔

That’s according to the Pentagon’s annual report to Congress on China’s military progress.

It says that like the United States and Russia, two major nuclear powers, China is building a “nuclear triad” that provides nuclear weapons from surface-to-air ballistic missiles, air-to-air missiles and submarines. Has the ability to

The report says China does not want the ability to launch a nuclear attack on a potential nuclear-armed adversary – primarily the United States – without provocation but to prevent attacks by others while maintaining a credible threat of nuclear retaliation. Wants

A year ago, the Pentagon’s China report said the country had about 200 portable warheads and would double that by 2030.

It “raises questions about their intentions,” the official said, urging Beijing to be more transparent about its nuclear power development.

The Pentagon has identified China as its primary security concern for the future, as Beijing pledges to transform the People’s Liberation Army into a “world-class force” by 2049, in line with its official plan.

China is expanding its air, space and naval forces with the goal of globalization, as the US military has had for decades.

This animosity has raised concerns about a possible confrontation between the United States and China, particularly over Taiwan, which China claims as its territory but enjoys close support from non-state actors.

The new US report says China’s rapid military modernization aims to achieve by 2027 the ability to overcome any setbacks in trying to reclaim Taiwan through pressure or military force.

By 2027, China’s goal is to “bring the US military’s counter-capabilities in the Indo-Pacific region, and force Taiwan’s leadership to the negotiating table on Beijing’s terms,” ​​the report said.

The report confirms reports in recent months that in October 2020, Pentagon officials were forced to allay real concerns in Beijing that domestic political tensions over the presidential election had led the United States to withdraw from China in southern China. Intends to stir up controversy. the sea.

After senior Pentagon officials moved to speak directly to their Chinese counterparts, concerns eased and a Chinese defense spokesman publicly announced that the United States did not intend to create a crisis.

“These incidents highlight the potential for misunderstandings and miscalculations, and the importance of effective and timely communication,” the report said.

The report also questions the intent of the PLA in the biological research of substances that may have both medical and military uses.

“Studies conducted at the PRC’s military medical institutions identified, tested and discussed the diverse families of powerful toxins with dual-use applications and discussed their properties,” the report said. Concern was expressed over compliance with the global biological and chemical weapons treaties.

Such concerns have been echoed since early 2020, when the Code 19 epidemic first broke out in the area of ​​the Chinese PLA-connected Chinese Biological Research Laboratory in Hunan.

The Chinese have denied any involvement in the lab, but investigators have limited access to it.

Meanwhile, the Pentagon’s top general warned on Wednesday that the Chinese military’s remarkable technological advancement, as evidenced by its recent global orbiting hypersonic missile test, could lead the world into an era of growing strategic instability. Ready for

“We are witnessing the greatest change in the global geostrategic power that the world has witnessed,” General Mark Millie, chairman of the Joint Chiefs of Staff, told the Espanyol Security Forum.

“That means we have to put a premium, in my view, on maintaining the peace of the great power,” he said.