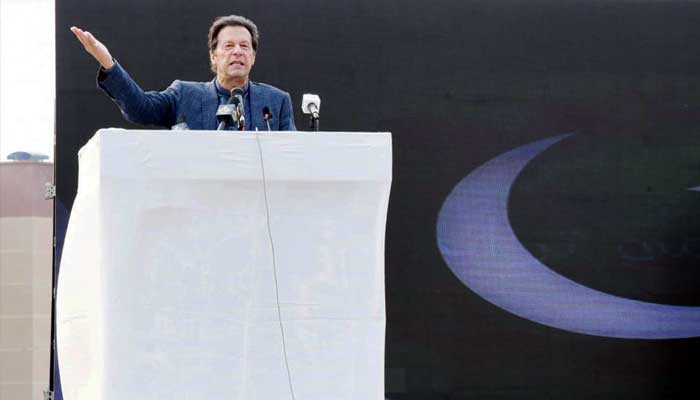 Attock: Prime Minister Imran Khan on Friday said that the decision to abruptly close three sugar mills in Sindh played a significant role in the rise in commodity prices.

“The price of sugar in Pakistan has reached Rs 140 per kg. I inquired why this is so. I found out that the three sugar mills that were working in Sindh have been shut down,” the PM said. I said this while addressing a function. The cornerstone of the Maternal and Child Hospital

The Prime Minister said that when the sugarcane crushing season starts in Pakistan, first the sugarcane is taken to the sugar mills from Sindh and then from Punjab.

He said that when three sugar mills in Sindh were closed, the supply suddenly decreased and then the prices reached Rs. 140 per kg.

The Prime Minister further said that he later came to know that due to shortage of supply, sugar mills in Punjab started hoarding of commodities.

“I told the chief secretary that our law prohibits hoarding and so if sugar mills are doing that, we should recover the stock and bring it to market so that the price goes down,” he said.

Prime Minister Imran Khan said that we came to know that since July Sugar Mills had obtained a restraining order against this rule and therefore our government was unable to do anything.

The Prime Minister further said that it was further learned that the Competition Commission of Pakistan had imposed fines of Rs. 40 billion on the mills after it was found to be stockpiling sugar through cartelization. “They also got a restraining order against him,” he said, apparently upset.

Prime Minister Imran Khan further criticized the sugar mills, saying that they had gone so far as to get a waiver order against the Rs 500 billion tax that the Federal Board of Revenue (FBR) had given the sugar an “off-book”. “Accused of selling. , Discovered by the Sugar Commission, which investigated the country’s recent sugar crisis.

“It is a great injustice that the sugar mafia breaks the backs of our people and earns billions,” he said. And when the government moves to do something, it gets a stay order.

Cheaper than other oil importing countries in Pakistan

The Prime Minister also spoke about the rising fuel prices in the country, insisting that petroleum products in Pakistan are still cheaper than in other oil-importing countries in the region.

He said there was a shortage of supplies around the world after the lockdown to prevent the spread of the corona virus, which extended to oil. He noted that when commodity prices were low in the beginning, when economies gradually resumed regular activities, prices later doubled.

“It (oil) has risen from $ 45 to $ 85 a barrel,” he said, adding that when oil prices rise, everything becomes more expensive, including shipping costs for shipping, oil. Imports and power generation that depend on oil.

Imported palm oil, pulses – 70 per cent of which are imported – also became more expensive, he said.

“So naturally, when global commodity prices rise, Pakistan is also part of the world. It doesn’t exist outside of that,” the Prime Minister laughed.

He said that the government was working hard to save the people from the burden of inflation.

Talking about the countries of the region, he said that there is a lot of noise in India, where petrol is Rs 250 per liter, and in Bangladesh where it is Rs 200 per liter.

“Petrol in Pakistan is still cheaper than other oil-importing countries in the region,” the prime minister said afterwards.

Five years from now, poverty will be reduced

He said that Khyber Pakhtunkhwa had a coalition government in 2013 and won a two-thirds majority in 2018, citing the vote of confidence as the reason for improving the lives of ordinary people in the province.

The Prime Minister cited a survey by the United Nations Development Program (UNDP) which acknowledged the reduction in poverty in KP between 2013 and 2018.

“Five years below the line, anyone will be able to accurately decide whether or not poverty has been reduced in the country,” he said.

The Prime Minister said that now after 50 years Pakistan is witnessing the construction of three big dams, 10 dams will be built in 10 years.

Prime Minister Imran Khan said that this is the first government in 50 years that is thinking of the next generation.

“We have come up with a five-year mandate, not two or three,” she said, criticizing previous governments for thinking only half way through the next election.

The Prime Minister said that if the lives of the people improved in the next five years, they would consider themselves successful.

He listed extensive improvements in other areas, such as the 2.5 billion trees being planted with the environment for next-generation improvement and the improvement of national parks, and the government’s health insurance scheme.

Health card for every family in Punjab till March

“In Western countries, you have to pay for insurance,” he said.

According to the Prime Minister, Punjab is spending Rs 330 billion to provide health insurance to every citizen, while all families in Khyber Pakhtunkhwa have been given health insurance.

The Prime Minister said that by March, every family in Punjab will also have a health insurance card.