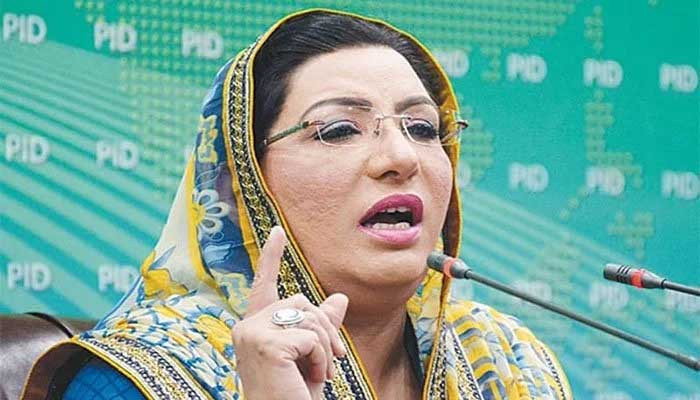 Firdous Ashiq Awan, a former aide to Punjab Chief Minister Usman Bazdar, said on Saturday that the ECP’s fact-finding report on the Daska by-election was being “twisted” to cast doubt on his role.

Addressing a press conference, Awan said that PTI candidates from Daska have taken the report to the Supreme Court.

The inquiry report, the results of which were discussed in the media a day earlier, determined that the by-election of NA-75 Sialkot IV at Daska on February 19 was not fair, free and transparent.

Commenting on the report’s findings, Awan said the abduction of presiding officers was not clear. He insisted that the government has no soft spot for anyone regarding the Daska elections.

Awan’s name was included in the fact finding report. According to the report, Muhammad Iqbal Kluya, Deputy Director (Colleges) of the staff assigned by the Education Department for election duty, was found involved in attending meetings at Sialkot AC House Daska, which was aimed at manipulating the election process. Ali Abbas, Zeeshan Javed, Asif Hussain, Firdous Ashiq Awan, Muhammad Owais and some others were present.

No malice aforethought was reported in the report.

Later, the peak inside Geo News In the program “New Pakistan”, Awan said that the Punjab government would issue a formal statement regarding the ECP report.

“The report does not mention any malice on my part,” he said, adding that his name was given in the report “to give it a special color”.

Awan said the report only mentioned that she was present in the AC office. “Where in the report is it written that I was insulted?”

“There was no meeting at the AC office. My person has been falsely accused,” he added.

He said that he would challenge the investigation report of Daska election, adding that the responsibility of the party’s campaign was not given to him but to others.

The show’s host, Shehzad Iqbal, asked Awan if she was present at the meetings at AC House or Women’s Degree College.

“Of course not,” Awan repeated.

He said that if there was any misuse of power in the report, it should be investigated.

“The PTI government has never and will never do anything wrong. A spokesman for the Punjab government should come forward and speak on the issue,” he added.

Electoral officials and other government officials “did not play their designated role properly,” the report said. [and] They were found to be puppets in the hands of their illegitimate masters. “

The role of the education department

Muhammad Iqbal Kaloya, Deputy Director (Colleges), Sialkot, was found attending meetings at AC House, Daska, among the staff assigned for election duty of the Education Department, with the aim of manipulating the election process. Abbas, Zeeshan Javed, Asif Hussain, Firdous Ashiq Awan, Muhammad Owais and some others were present.

According to the report, he “illegally summoned the POs to the office of Nawaz Cheema, Principal, Government Degree College for Boys, Daska, so that they could follow the instructions.”

According to the report, after the polling ended, the 20 missing POs left their respective polling stations in private vehicles “under a planned scheme” and first stayed at PS Qila Klarwala / PS 17, DSP’s office, Pasrur. Reached Sialkot And market, etc., after about 8:30 p.m.

It said he stayed “for more than seven hours” in an “unknown building” on Shahabpura / Yogoke Road near Zahra Hospital and was then escorted by police security to the Returning Officer’s office in Jessorewala.

“Before reaching their destination, all POs were transferred from Toyota High School to a police van and eventually to the Returning Officer’s (RO) office,” the report said.

The 20 POs also included two female POs. One of the two female POs somehow managed to get the actual result of the polling, but the other female PO revealed a shameful and ridiculous fact that she had been abused. Strictly in the suspicious place, “the report further revealed.

It said that during the course of the inquiry, it was also revealed that the Deputy District Education Officer (Female) Daska had a meeting of his subordinate Assistant Education Officers (AEOs) / POs with Asif Hussain, Assistant Commissioner, Daska and Zulfiqar Work. Managed DSP Sambarial, at his home where the participants were instructed to “support the government in the said by-elections, allow voters to cast their votes on CNIC copies, follow the instructions received from DDEO (F), Daska during polling.” And don’t worry if the law and order situation is bad. “