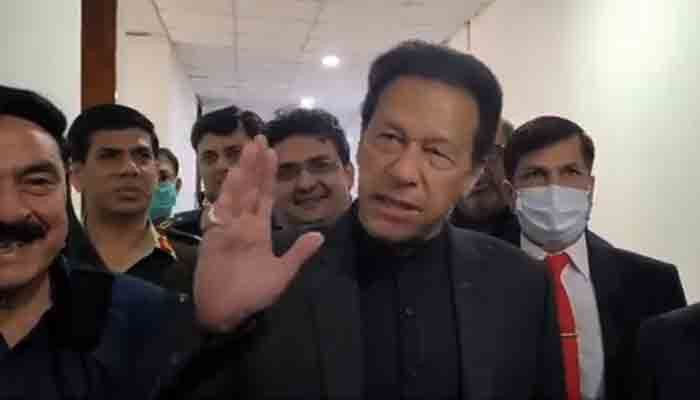 ISLAMABAD: Ahead of today’s crucial joint sitting of Parliament, Prime Minister Imran Khan said that every player on the ground said that whatever the opponent can do, he can do better.

Talking to reporters at Parliament Horse, PM Imran said that when a player walks on the ground, he is ready for anything.

The government and the opposition are ready to back down

Both the government and the joint opposition are ready to increase their strength in today’s joint sitting of parliament, as the ruling party appears confident of passing all its bills after gaining the support of its allies.

The government is eyeing the passage of more than two dozen bills with the help of its allies, while opposition parties have vowed to support the treasury’s efforts to pass “black laws” at all costs. Will fail

Bills submitted for approval were sent to the joint sitting of the National Assembly after they were not passed within 90 days.

Members of the National Assembly have begun arriving to attend the joint sitting of Parliament. Prime Minister Imran Khan, Leader of the Opposition Shahbaz Sharif and PPP Chairperson Bilawal Bhutto Zardari reached the Parliament House while other members were also arriving.

The PTI-led government currently needs a simple majority of 440 members (341 MNAs and 99 senators) in a joint sitting of the houses to approve the bills.

According to statistics, the government currently has the support of at least 221 parliamentarians, including 179 MNAs and 42 senators.

The Treasury benches collectively have a two-vote lead over the opposition parties. Opposition parties have the support of 219 parliamentarians, including 162 MNAs and 57 senators.

There are four independent MNAs including Mohsin Dawar, Ali Wazir and Ali Nawaz Shah who support the opposition while Aslam Bhootani is sitting on the treasury benches.

The MQM, comprising seven MNAs and a senator, on Tuesday announced its support for the government in approving all the bills in a joint sitting after Prime Minister Imran Khan and members of the cabinet removed their reservations in various meetings. What

Meanwhile, in this critical situation, despite the government’s claims, the PML-Q has not yet formally announced its support for the controversial legislation. A day ago, a meeting of PML-Q was held under the chairmanship of Chaudhry Pervaiz Elahi in which the party leaders expressed concerns over inflation, increase in prices of petroleum products and electricity and gas prices.

“In this situation, we cannot face our voters,” he said. The PML-Q is represented in Parliament by five members of the National Assembly and one Senator.

The opposition developed a joint strategy

In response, the joint opposition in today’s session is determined to resist the government and prevent it from legislating on “black laws”.

This commitment was expressed in a meeting of the joint opposition chaired by Leader of the Opposition Shahbaz Sharif in the National Assembly on Tuesday.

It was decided at the meeting that all party leaders would ensure the presence of their legislators during the meeting as the number of obstruction of legislation would vary.

Expressing his views during the meeting, Shahbaz Sharif had said that “the government has pushed the country towards economic decline and the people are burdened by inflation”.

The opposition leader said the government could not protect itself through its “black laws” because it was “no better than a falling wall”.