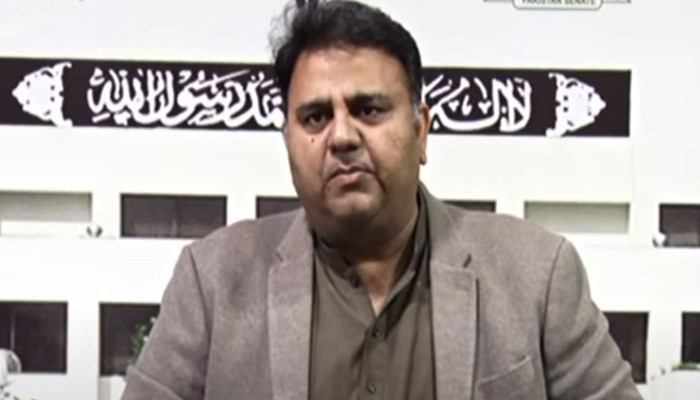 The government sought reconciliation on Wednesday and asked the opposition to come to the negotiating table after announcing that it would challenge the bills passed in today’s joint sitting of parliament.

The government successfully passed amendments to the Elections Act, 2017, which allowed the use of electronic voting machines (EVMs) and gave the right to vote to overseas Pakistanis through the Elections Second Amendment Bill, 2021.

The International Court of Justice (Review and Reconsideration) Bill 2021 – which allows Indian spy Kulbhushan Jadhav the right to review and revise – was also passed in Parliament.

Chaudhry asked the opposition to change its strategy

Addressing a press conference in Islamabad, Information and Broadcasting Minister Fawad Chaudhry said that the opposition should change its strategy and sit at the negotiating table with the government.

The information minister denied the opposition’s claims that the government had received less votes, saying the ruling coalition had won 233 votes in the joint session as it also had a lead in the Senate.

“The opposition must stop being so stubborn and admit that it cannot defeat us,” he said.

Chaudhry said that the next general elections would be held through EVM. He said the “attitude” of the opposition had forced the government to “pass the bills unilaterally”.

Elaborating on a technical issue related to the Electoral Amendment Bill, he said that overseas Pakistanis would vote through i-voting (including internet usage), while local citizens would cast their vote through EVM (an electronic method). Will put

The Information Minister said that bills related to the rights of women and children were also passed in the Parliament today, adding that for the first time PTI has passed a bill on inheritance.

Mocking the opposition, Chaudhry said he had a schedule: “For one week, they will speak against the institutions, and next week, against someone else.”

Chaudhry claimed that “they (the opposition) will see an increase in their failures in the days to come.”

On the opposition’s decision to go to court against the bill, he said that both houses had approved the legislation, so challenging them would not be an easy task.

“Both houses have passed the bill. […] It will be difficult to challenge them, but they can be challenged, “he added.

‘Opposition vote count was much lower than actual number’

Legislation cannot take place in such an environment […] The PML-N president said that the counting of votes of the opposition was far less than their actual number.

Shahbaz Sharif said that the opposition told the speaker that the votes of the government were not enough to get the bill passed but the speaker did not listen to us.

“We believe that three or four additional votes were counted in favor of the government,” he said, adding that “there were more than 200 legislators in our House today.”

Bilawal said that the opposition would challenge the bills at every forum.

Meanwhile, PPP chairman Bilawal Bhutto Zardari said the opposition would challenge the bills passed in the lower house, as the government did not have “enough votes” to pass them.

Speaking to media outside Parliament, Bilawal said that Clubbhushan Jadhav would be challenged on NRO, Electoral Amendment Bill and all other bills at every forum.

Bilawal said that the government did not succeed in the parliament today.

Bilawal said he had “tried his best” to draw the attention of the treasury benches and the Speaker of the National Assembly to the rules of the joint sitting, regretting that he had not paid any attention to them.

The PPP chairman clarified that according to the law, more than half of the votes of the joint sitting are required for the passage of the law in the parliament.

Elaborating further, he said that the treasury benches need at least 222 votes to pass the bill in the joint sitting, where 342 legislators were from the lower house and 100 from the upper house.

However, he said the government did not have enough numbers to get the bills passed.

Maulana Asad Mahmood of JUI-F mocked the Speaker of the National Assembly and said that the manner in which the parliamentary proceedings were conducted was unprecedented.

The Speaker did not allow the opposition to speak. […] The government has ‘organized’ the legislation, and we will challenge it at every forum, “said Maulana Mahmood.