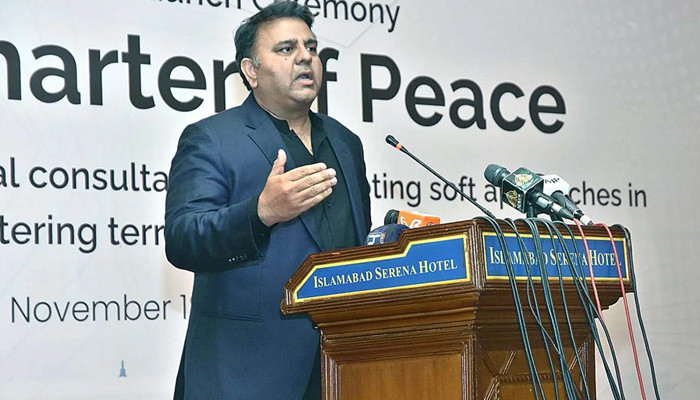 ISLAMABAD: Information and Broadcasting Minister Fawad Chaudhry on Thursday said that these are schools and colleges which are the main cause of extremism, not madrassas, as is the general opinion.

Addressing the inaugural function of the “Charter of Peace” organized by the Pakistan Institute of Peace Studies, the Information Minister said: “Teachers were deployed in the 90’s to propagate extremism.”

Chaudhry said the state and government were “not fully prepared” to deal with extremism, adding that they had to “take a step back” to deal with the Tehreek-e-Libek Pakistan (TLP).

The TLP staged violent protests in the country last month, after which a secret agreement was reached between the government and the party on October 31, within days of which the party was disbanded and its leader Saad Rizvi was released. given.

The information minister said there was “no threat” from the United States or Europe. He said Pakistan was facing “the biggest threat from within”.

Chaudhry lamented that the scourge of extremism could isolate and destroy a country, and unfortunately, Pakistan was “pushed towards it” for political and foreign policy reasons.

He noted that if a person’s views differ from those prevalent in society, he or she is labeled a “non-believer.” “Islam teaches balance and peace. The teachings of Islam or any other religion are not the problem, the problem is only their interpretation.”

“Once the state writ expires, extremist elements begin to dominate.”

Elaborating on other issues, he said, “We have destroyed our policing and administrative system” and found no alternative.

“If you can’t save people’s lives, how can you bring about soft change? A state that can’t establish its writ for long cannot survive long.”

The Information Minister noted that when the state writ expires, extremist elements begin to gain ground. He further said that observance of law is very important for bringing positive change in the society.

Chaudhry lamented the destruction of the numbered, watchman and police station institutions and said that the lives of the people could not be saved unless the law was upheld.

“The sole duty of the state is to enforce the law. The existence of a state which cannot enforce the law will be called into question, which will later lead to civil war,” he said.

He noted that in the event of a civil war, state control would be reduced and “groups” would take over.

Chaudhry said that in order to eradicate extremism, the rhetoric around it would have to change. The Minister of Information said that taking an extremist view is not a problem, because people have different views – and no one can stop a person from thinking like that.

“However, such a person cannot be allowed to attack the government with a Kalashnikov […] Having a different point of view and imposing it on others are two different things, “he said.

The information minister said the state should ensure that no group has the “right to violence” so that diverse thinking can coexist in society.

“When the state weakens, extremist groups become stronger,” he said. When this happens and they ask the state that it will not follow any ideology other than theirs, then it happens when we have a problem.

He added that unless the state guarantees the rule of law and successfully establishes its writ, it cannot bring about “soft change”.