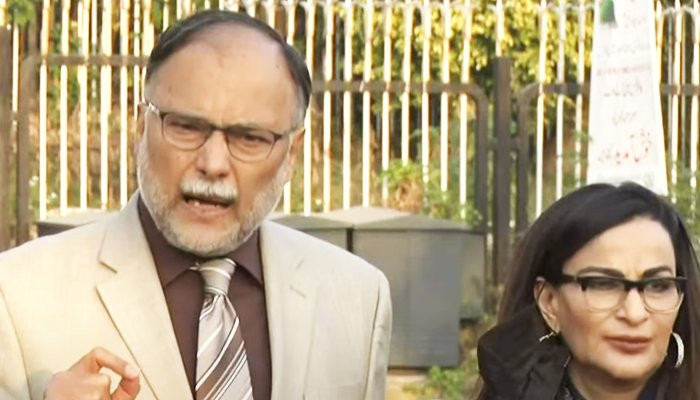 ISLAMABAD: The joint opposition on Thursday termed Wednesday’s joint parliamentary session as the “darkest day” in the history of parliament as it criticized the government for passing more than three dozen bills.

Yesterday, the government came to power with a record 33 bills in a single day, including the controversial bill on the use of electronic voting machines (EVMs) and the International Court of Justice.

The most important of the bills passed were amendments to the Elections Act 2017, which allows the use of electronic voting machines (EVMs) and gives Pakistanis living abroad the right to vote in general elections.

PML-N leader Ahsan Iqbal, while addressing a press conference with PPP Senator Sherry Rehman in Islamabad, said that this was the “darkest day” in the history of Parliament as he expressed hope that the courts would now abide by the Constitution. Will maintain. The opposition aims to challenge the bills in court.

He reminded the government that it is not the only stakeholder in the elections so it has no authority to bulldoze the bills in the House.

“The Election Commission is a major stakeholder. It is responsible for holding free and fair elections,” he said, adding that by passing laws, the government had laid the groundwork for “rigging the next election”.

Highlighting the EVM, Iqbal said that they are also victims of fraud even if they do not work online. “The machines will work under the supervision of the government. They can be tampered with.”

The PML-N leader also claimed that the machines could affect the privacy of the voters, adding that even then the government had ignored the Election Commission of Pakistan (ECP) and the Senate.

He also warned the ECP that holding free and fair elections in the country would be against its duty if it came under pressure from the government. It may be recalled that the government ministers had leveled several allegations against the body but later apologized.

The PML-N leader said that no law was acceptable to the opposition without consultation.

Iqbal said the passage of the bill on Indian spy Kulbhushan Yadav in the presence of National Assembly Speaker Asad Qaiser was a “blot” on Parliament.

He added that the government had passed the International Court of Justice (ICJ) (Review and Revision) Bill 2021, giving Indian spies “NRO” (referring to the waiver under the National Reconciliation Ordinance) – which allowed magic. Gives. The right to review and review.

Furthermore, he said that the sovereignty of the State Bank of Pakistan (SBP) was in jeopardy and the government wanted to bulldoze legislation regarding the central bank.

He said the opposition would present its views in court on the “unconstitutional” steps taken by the government.

In her address to the conference, Senator Sherry Rehman said that the events that took place in the Assembly yesterday were not witnessed even under Musharraf. […] It was worse than martial law. “

The PPP lawmaker said the government had “trampled” democracy in parliament by passing bills with an “artificial majority”.

“We will challenge these bills in every possible forum,” he said.