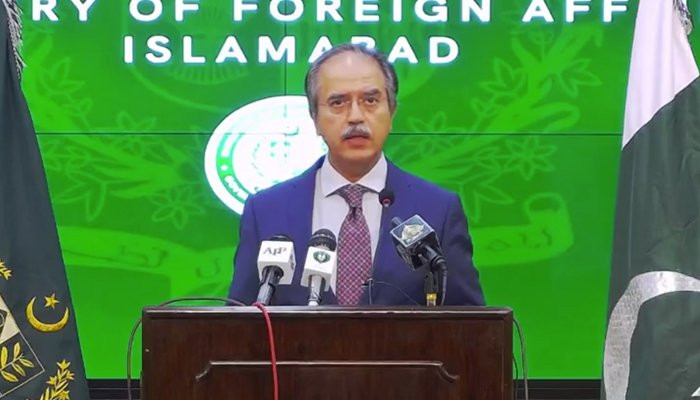 Pakistan on Thursday condemned India’s ban on Friday prayers, vandalism of mosques, attacks on worshipers and desecration of Muslim places of worship.

Foreign Office (FO) spokesman Asim Iftikhar said in his weekly press briefing that Pakistan was deeply concerned about the growing trend of violence against minorities in India, especially Muslims, and growing obstacles to religious freedom.

He said that the detention of hundreds of workers under strict laws for raising voice against widespread human rights violations of minorities in India has attracted international attention.

“We believe that global efforts based on the principles of cooperation and mutual understanding are needed to address the growing trend of intolerance, discrimination, xenophobia and Islamophobia,” Iftikhar said.

He further said that Pakistan is sincerely playing its role in this endeavor and will continue to do so.

The spokesman called on the international community, particularly the United Nations and relevant human rights and humanitarian organizations, to fulfill their responsibilities to prevent the growing Islamophobia in India and the violent attacks on minorities, especially Muslims, and their safety and security. And ensure the safety of their locations. Of worship.

Iftikhar said that Pakistan rejects the State Department’s review under US national legislation on religious freedom and considers it arbitrary and selective.

The spokesman said that calling Pakistan a “country of special concern” was completely contrary to the ground realities and raised serious doubts about the credibility of the exercise.

Each year, the Secretary of State “identifies governments and non-state actors who, due to violations of their religious freedom, are entitled to merit under the International Religious Freedom Act,” said Secretary of State Anthony J. Blanken. Have a position. “

The US Secretary of State has listed Pakistan and several other countries for “allegedly engaging or tolerating systematic, ongoing and serious violations of religious freedom.”

Iftikhar noted that such thematic positions do not play a role in promoting the cause of religious freedom around the world.

“Pakistani society is multi-religious and pluralistic with a rich tradition of interfaith harmony. Religious freedom and protection of the rights of minorities are guaranteed in our constitution and it is enshrined in legislation, policy and administrative measures,” he said. Has been confirmed by Said.

Iftikhar pointed out that India’s apparent shortcomings, where the RSS-BJP government and its leaders openly disregard religious freedom and institutionally discriminate against minority communities, are unfortunate. And calls into question the credibility of the US report.

“The involvement of the state in organized violence against the Muslim minority in India is a matter of record,” the spokesman said.

Iftikhar said it was no secret that attacks by cow guards and assaults on Indian Muslims were regular, with the perpetrators being pardoned.

He said that in Hindutva-influenced India, organized satanism, evictions, backwardness and targeted violence against Muslims have become commonplace.

The US state ignored the findings and recommendations of the US Commission on International Religious Freedom, as well as hearings in the US Congress on the mistreatment of minorities in India and violations of religious freedom, including in Muslim-majority Indian-occupied Jammu and Kashmir. Given Department, he said.