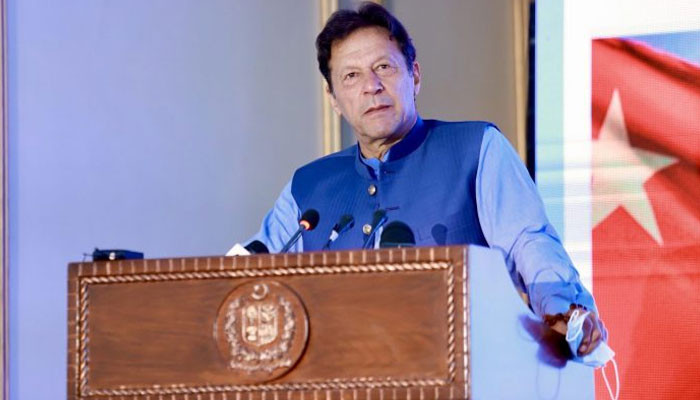 ISLAMABAD: Prime Minister Imran Khan on Thursday said that granting voting rights to overseas Pakistanis through Wednesday’s legislation would not only increase their importance but also enable them to use their voting power to monitor the government. Will also be able to.

“Every government will be forced to value overseas Pakistanis because (now) they can vote. When they vote, they will choose a government that will make their lives easier,” he said. He was speaking at the launch of a portal to help immigrants verify their power of attorney digitally.

The Prime Minister pointed out that in a democracy, voters can keep an eye on their government through their vote.

He said that with about 9 million overseas Pakistanis, governments would be compelled to value them.

The Prime Minister said that legislation on the use of EVMs in elections was made possible as the National Database and Registration Authority (NADRA) made it easier to ensure elections using the latest technology.

“Because technology has changed the world so much, not using it would be nothing but a fool’s errand,” he said.

Prime Minister Imran Khan recalled that the Election Commission in 2008 and a Judicial Commission in 2015 had also recommended the use of EVMs to ensure transparent elections.

“Those who want to take advantage of the old system will never allow change,” he said.

The Prime Minister also mentioned the government’s resistance from within the Utility Stores and the Federal Board of Revenue (FBR) when it tried to automate its work to bring transparency.

He told those present at the event that the government would launch a track and trace system by next week, which was possible after a great deal of effort and would help in finding out the actual production figures. “Such a system would discourage tax evasion and keep a close eye on large businesses such as cement, sugar and cigarettes,” he said.

“EVMs operate all over the world and can solve all election related issues in Pakistan,” he said.

The Prime Minister said that in the last elections about 1.5 million votes were rejected which could have been avoided by using EVMs. He added that EVMs would also help eliminate the practice of fraudulent ballots.

Prime Minister Imran Khan said that the present government also demanded an open ballot in the Senate elections as a large amount of money was involved in the secret ballot.

He said that both the PPP and the PML-N opposed the move despite the fact that the PTI did not benefit from the open ballot.

Referring to the opposition’s criticism of the legislation in the joint sitting of parliament, he said that “yesterday’s drama” was to prevent overseas Pakistanis from voting.

The Prime Minister said that the PTI government has fulfilled its promise to give immigrants the right to vote and reiterated his government’s commitment to make their lives easier.

The Prime Minister recalled that the process of developing a portal for digital verification of power of attorney was initiated after an overseas Pakistani from Greece raised the issue.

He said that earlier about 75,000 migrants had to travel to Pakistan for this purpose and had to go through a cumbersome process.

The Prime Minister repeatedly praised the overseas Pakistanis for their contribution to the national economy with 30 billion in remittances.

“Unfortunately, past governments have not been able to harness the potential of Pakistanis abroad who value their country more and support it in times of trouble,” he said.

The Prime Minister said that the country would not need any facility or loan from the International Monetary Fund (IMF) if it used the potential of Pakistanis abroad properly.

He said that Pakistanis living abroad had to suffer due to corrupt system and practices.

The Prime Minister said that the Ministry of Foreign Affairs has specifically directed the embassies in Saudi Arabia and the United Arab Emirates to provide facilities to Pakistani workers on the recently launched Foreign Minister’s Portal Pakistan (FM Portal). Be able to highlight your problem directly.