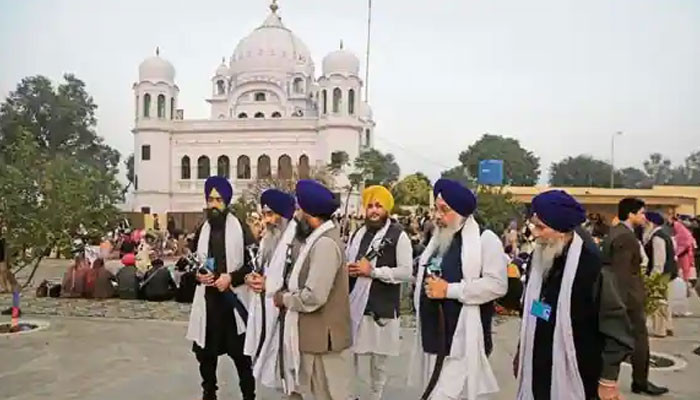 ISLAMABAD: Indian Punjab Chief Minister Charanjit Singh Channy along with his ministers and other politicians will arrive in Pakistan today (Thursday) via Kartarpur corridor to attend the annual memorial service of Guru Nanak, the founder of Sikh religion. Interpreter

The Indian Chief Minister and other politicians will be part of the first delegation to visit Gurdwara Darbar Sahib in Kartarpur from March 2020. The pilgrimage to Kartarpur Sahib Gurdwara was suspended last year due to COVID-19 epidemic. However, the corridor reopened on Wednesday.

The delegation will visit Gurdwara Darbar Sahib to attend the Guru Purab on the occasion of Guru Nanak’s birthday. Gurpurab will be celebrated on Friday (November 19).

A Foreign Office spokesperson said that Rajasthan Cabinet Minister Harish Chaudhry and eight members of the Indian Punjab Legislative Assembly would also be part of the delegation.

However, Sadhu’s media adviser Surinder Dala later said that the Punjab Congress president would visit the Kartarpur corridor on November 20, not today.

Earlier, Cheney had welcomed the Indian government’s decision to reopen the Kartarpur Corridor and said that the state cabinet would be part of the first “Jatha” (group) to visit the historic shrine in Pakistan on November 18, India. The Times reported.

As soon as the Kartarpur corridor was opened, the arrival of Sikh pilgrims started.

Thousands of Sikh pilgrims crossed the border from India and the rest of the world into Pakistan on Wednesday, before the 552nd birthday of Baba Guru Nanak, the founder of the religion.

The Kartarpur Corridor, a visa-free crossing that allows Indian Sikhs to visit temples in Pakistan where Guru Nanak died in 1539, was first opened in 2019 on the occasion of Nanak’s 550th birthday but last year the epidemic It was closed due to illness.

Indian Home Minister Amit Shah has announced that the corridor will reopen on Wednesday, ahead of Nanak’s birthday celebrations this Friday.

“In a major decision, which will benefit a large number of Sikh pilgrims, the PM arenarendramodi government has decided to reopen the Kartarpur Sahib corridor from tomorrow,” he said on Twitter.

“I am confident that the government’s decision to reopen the Kartarpur Sahib corridor will only add to the joy and happiness in the whole country,” Shah added.

A Pakistani official source said the corridor had never been closed by Pakistan, and was awaiting confirmation from Indian authorities that visitors would be allowed to cross.

The white-domed shrine at Kartarpur, a small town just four kilometers (2.5 miles) inside Pakistan, has been out of reach of Indian Sikhs for decades due to hostile relations between the two countries.

When Pakistan seceded from India at the end of British rule in 1947, Kartarpur ended on the Pakistan side of the border, while most of the Sikhs in the region remained on the other side.

An estimated 20,000 Sikhs remain in Pakistan after millions fled India after the post-partition religious violence.

Guru Nanak, born in 1469 to a Hindu family near the present-day city of Lahore, Pakistan, is revered by both Sikhs and Hindus who prepare feasts for the community called Langar on his birthday.

With additional input from APP and AFP