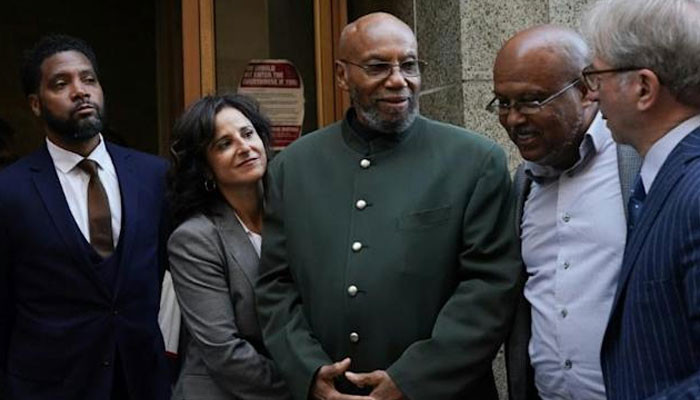 NEW YORK: A New York judge on Thursday overturned the sentences of two men sentenced to decades in prison for the 1965 murder of civil rights leader Malcolm X, one of the highest-profile murders in US history. Admitted serious abortion of justice.

Judge Alan Bibin acquitted Muhammad A. Aziz and Khalil Islam of applause from the courtroom, a landmark move that amended the statement behind one of the deepest wounds of the American civil rights movement.

“I am sorry that this court cannot completely reverse the serious misconduct of justice in this case and bring back to you the many years you have lost,” the judge told Aziz and Islam’s family, who in 2009 Had passed away

The official record for more than half a century is that three members of the black nationalist group Nation of Islam – recently abandoned by Malcolm X – shot the famous leader while he was at the Harlem Ballroom. Arrived to speak on the podium.

Aziz, Islam, and a third person, Mujahid Abdul Haleem, were convicted in 1966 – but historians have long expressed skepticism about this thesis.

Haleem – now in his 80s and released from prison in 2010 – pleaded guilty but pleaded not guilty to the charges.

And in 2020, Case was cast in the Netflix documentary “Who Killed Malcolm X?” Was reopened after the release of

A 22-month joint investigation by the Manhattan District Attorney’s Office and the two men’s lawyers found that the prosecution, the FBI and the New York Police Department have withheld evidence that could lead to his acquittal. Could cause

Manhattan District Attorney Cyrus Venus said the investigation “made it clear that these individuals did not receive a fair trial” and apologized to the law enforcement community for “decades of injustice.”

“We can’t restore what has been taken from these people and their families, but by correcting the record, maybe we can begin to restore that faith,” Venus said.

After Malcolm X was shot dead on February 21, 1965, Haleem was shot in the leg and taken into custody at the scene.

Aziz and Islam were arrested several days later. Both denied involvement in the killings and provided alibis where they were at the time of the shooting.

Aziz told the court, “The events that brought us here should never have happened; they were and are the result of a process that was fundamentally corrupt – that in 2021 black people Is very familiar with, “Aziz told the court.

“While I do not have to tell this court, these prosecutors, or any piece of paper that I am innocent, I am very happy that my family, my friends, and the lawyers who have helped me all these years. Key and me are helping, we are finally seeing. The truth we all know has been officially acknowledged, “he added.

Stating that the sentences “betrayed and deceived” the public, civil rights lawyer David Shanies told the court that the two men had become “victims of the same racism and injustice that Malcolm X had confronted.”

The Shanies and the Innocence Project, a non-profit organization that has secured the release of hundreds of falsely convicted prisoners in the United States, has cooperated with Vance’s office in re-investigating the case.

False punishments mean that the real culprits – who are thought to be dead – can never be held accountable for killing the lofty figure whose teachings are today. Also the foundation for the struggle for the rights of blacks in the United States.

The lengthy investigation provided no alternative explanation for the killers’ identities or killings.

And the important question remains, how could American intelligence, which had long been monitoring Malcolm X, not know if the leader was a threat or did something about it?

Born in 1925, Malcolm X, along with Martin Luther King Jr., became one of the most influential African Americans of the 20th century.

As a young man he became involved in petty crime and while in prison he became a devoted follower of the Nation of Islam, a religious and political organization that advocates for black nationalism.

After his release, he changed his surname to “X”, a symbol of his family’s real name lost in slavery.

He rose to prominence as a minister and spokesman for the NOI, advocating for black self-reliance and dignity. He did not shy away from using violence to protect himself.

Disillusioned with the group, Malcolm X split in 1964, forming a short-lived organization of Afro-American units to continue advocating for black rights.