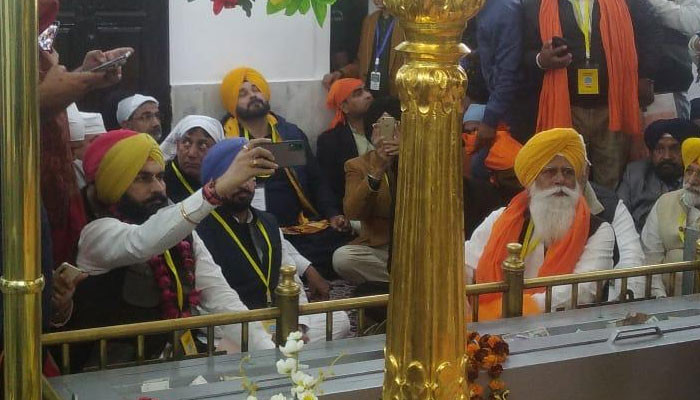 Kartarpur: Prominent Indian politician and former cricketer Navjot Singh Sadhu thanked Prime Minister Imran Khan for providing facilities to Sikhs on the birthday of Guru Nanak, the founder of the Sikh religion, and for giving him a warm welcome on his arrival in Pakistan. The prime minister is his “big brother.”

Speaking on the occasion, Sadhu thanked the Prime Minister for the warm welcome.

In a tweet shared by Indian ExpressSadhu can be seen entering Pakistan through the Kartarpur corridor. The former Indian cricketer-turned-politician says: [PM Imran Khan] I have an older brother. “

On November 18, important Indian politicians, including the Chief Minister of Indian Punjab, visited Gurudwara Kartarpur Sahib, a day before Gurpurab, the birthday of Baba Guru Nanak, the founder of the Sikh religion.

The Kartarpur Corridor, which connects Gurdwara Darbar Sahib in Pakistan, the last resting place of Guru Nanak Dev, the founder of the Sikh religion, with the shrine of Dera Baba Nanak in Gordaspor District, was reopened on Wednesday.

The pilgrimage to Kartarpur Sahib Gurdwara was suspended in March 2020 due to COVID-19 epidemic.

Indian Punjab Chief Minister Charanjit Singh Channy was part of the first delegation to visit Gurdwara Darbar Sahib in Kartarpur with his ministers.

He was received on his arrival by Sardar Amir Singh, President of Pakistan Sikh Gurdwara Prabandhak Committee (PSGPC).