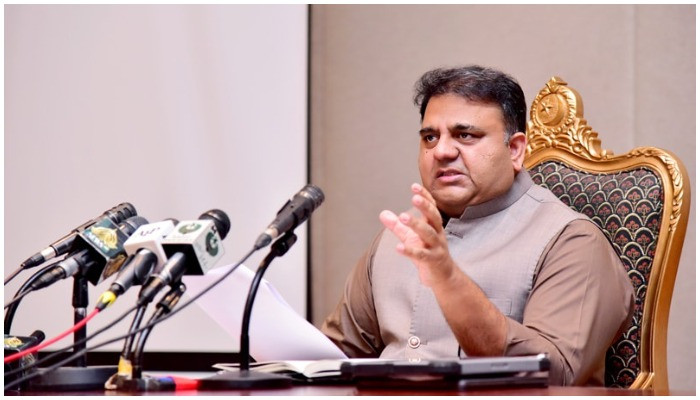 On Sunday, Federal Minister for Information and Technology Fawad Chaudhry said that the conclusion of the Asma Jahangir Conference of former Prime Minister Nawaz Sharif was tantamount to mocking the country and the constitution, as he had announced to reject the invitation to attend the event.

In a tweet, the federal minister apologized for attending a function in Lahore to remember human rights activist and well-known lawyer Asma Jahangir, calling the PML-N supremo a “fugitive”.

“I was invited to the Asma Jahangir conference today. I was told that the conference would end with a speech by a fugitive,” Fawad wrote.

Earlier, Fawad had termed the conclusion of the conference with Nawaz’s speech as an insult to the judges and judiciary.

Chaudhry tweeted, “The conference addressed by CJP and senior judges is ending with a fugitive speech. It is nothing but an insult to judges and judiciary,” Chaudhry tweeted.

He further added that he had advised the Supreme Court Bar Association to remain “neutral”.

“Advise SCBA to remain neutral, only then lawyers can do their part!” He wrote.

‘We respect the government’s point of view’

Speaking on Geo News program ‘New Pakistan’, President of Supreme Court Bar Association Ahsan Bhoon said that there were 20 to 25 sessions in the conference and the topic of each session was different.

He said the judges did not know who was going to address the conference and they did not need to be told.

Bhawan said that Fawad Chaudhry was invited as a special guest in the session on Afghan issues but he did not come.

The Chief Justice addressed the gathering on the first day.

Yesterday was the first day of the conference, in which Chief Justice of Pakistan Gulzar Ahmed delivered an impassioned speech during the ceremony.

The Chief Justice appeared to be losing his temper over the persistent allegations of bias against the judiciary, insisting that his court had never accepted pressure and would never do so.

Responding to a speech by veteran lawyer Ali Ahmed Kurd, in which Kurd accused the courts of not working independently, the chief justice responded: “I never [taken dictation from] No institution and never came under any pressure.

The country’s top judge said: “No one ever told me what I needed to say and no one dared to order me.”

“No matter how many cases have come before me, I have never decided on anyone’s request,” he said.

“No one interfered in my work. I made my decisions according to my understanding and the constitution and the law.”

Apparently referring to the recent controversy between former Chief Justice Saqib Nisar and former Gilgit-Baltistan Chief Justice Rana Shamim, Chief Justice Gulzar Ahmed said, “I have not taken anyone’s dictation till date and my fellow judges have done the same.” Let’s go No one can say that I have taken dictation.

The seemingly angry judge insisted that the courts were acting in accordance with the law and that the judges of the Supreme Court were trying to provide justice to the people.

“This is the beauty of the judiciary and democracy and we will abide by it,” he said. No one can dare to stop us.

However, dissent does not allow any party to accuse the courts of being under pressure, the Supreme Court judge emphasized.