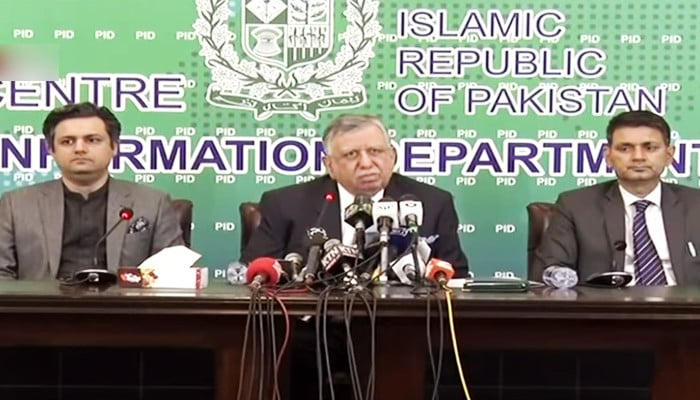 Addressing a press conference after receiving confirmation from the IMF regarding the staff level agreement, the aide to the Prime Minister said that Pakistan has already agreed to increase the price of electricity from the International Monetary Fund (IMF). Is.

“Therefore, it was a difficult task to withdraw from the program after receiving 500 500 million from the fund,” he added.

Federal Minister for Energy Hamad Azhar was also present at the press conference.

He said that the negotiations with the IMF had ended successfully, adding that the IMF had called for the continuation of tax reforms.

“The Asian Development Bank (ADB) and the World Bank will also provide us with funding,” he maintained.

“Tax reform needs to be further improved,” Tareen said, referring to the terms of the fund.

The adviser added that there was a need to increase the transparency of government agencies.

‘We have to amend SBP Act’

Highlighting the IMF’s condition regarding the sovereignty of the State Bank of Pakistan (SBP), the aide to the Prime Minister said that reforms have been introduced to clarify the functions of the central bank.

“We have to amend the SBP Act,” Tareen said, adding that Pakistan had already agreed to the SBP’s sovereignty condition when it imposed it in early March.

“Therefore, it was important for us to give autonomy to the SBP. I have said before that raising tariffs is not the solution,” Tareen said, adding that if prices rise, the pressure on the poor will increase.

Citing details of lengthy negotiations with international lenders, he said that during the talks, the Pakistani delegation tried to save some sectors, including agriculture.

However, he added that there is still room for improvement in tax laws and ease of doing business.

The aide to the prime minister also said that the IMF had asked Pakistan to increase the petroleum levy to Rs 10 billion, “which we will not be able to do.”

“Besides, they have asked us to impose a tax of Rs 700 billion,” he added.

Congratulating the adviser on the successful conclusion of the IMF talks, Hamad Azhar said that basic electricity prices would be increased in the coming months.

“These are difficult times and people around the world are having problems with COVID-19,” he said, adding that global inflation is at a 30-year high.

The adviser was of the view that monetary policy should be independent.

He added that the IMF acknowledged the excellent work done in the energy sector.