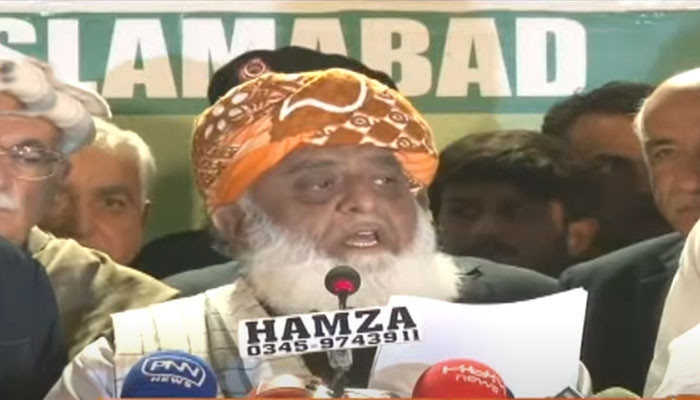 ISLAMABAD: Pakistan Democratic Movement (PDM) president Maulana Fazlur Rehman on Tuesday said that the integrity of the judiciary has come under question after recent allegations “from within”.

Speaking to media after the joint PDM meeting, he said that the JUI-F chief had said that there were “conspiracies” against former Prime Minister Nawaz Sharif, his party and leaders of other political parties. They were, in fact, conspiracies against Pakistan. The country and its democracy

Referring to Rana Shamim’s affidavit and alleged audio clip of Justice (retd) Saqib Nisar, he said, “We respect the courts but they also suffer.”

“With a heavy heart, we think they are [judiciary] We have to regain their status through our role, “he said, adding that recent controversies have raised questions about the independence and independence of the judiciary.

The JUI-F leader termed these conspiracies as the root cause of the economic crisis in Pakistan.

Fazal said the PDM would hold its next meeting on December 6 where the opposition coalition would take “final and important decisions”.

The JUI-F chief said that the entire nation was demanding an independent election commission. “Trimming the wings of the ECP is completely unacceptable,” he said, adding that the constitution already defines the commission’s powers.

Criticizing the “fake government”, Fazal said he had promised the government 10 million jobs but had so far “stolen” more than 5 million from the people.

He said the joint opposition would play a role in ensuring that Pakistanis abroad were “represented in parliament” and warned not to fall prey to the government’s “lies”.

Highlighting the Electronic Voting Machines (EVMs), he said the government wanted to hold elections at a time when the world was rejecting the same process.

“We reject this pre-poll rigging,” he said, referring to the government’s move to pass laws on voting machines.

Targeting the government’s economic policies, Fazal said it had made the SBP a “branch of the IMF”.

Earlier, sources said Geo News The opposition coalition discussed the former chief justice’s alleged audio leak in which he allegedly told another man that Nawaz Sharif and Maryam Nawaz would have to be punished for making room for Imran Khan in politics.

Sources said that the opposition leaders have decided to take up the issue at the national level.

According to sources, the opposition members present during the meeting agreed that the audio clip was further evidence of an alleged conspiracy to remove an elected Prime Minister (Nawaz Sharif) from office.

Sources confirmed that JUI-F chief and PDM president Maulana Fazlur Rehman had put his weight behind the decision to resign from the assemblies after a long march in Islamabad and a convoy of opposition lawmakers arrived there. Has given

The PDM has also agreed to challenge government laws related to EVMs and elections in the Supreme Court of Pakistan.

Sources further said that Senators Farooq H Naik, Azam Nazir Tarar and Kamran Murtaza have been tasked to work out a strategy in this regard.