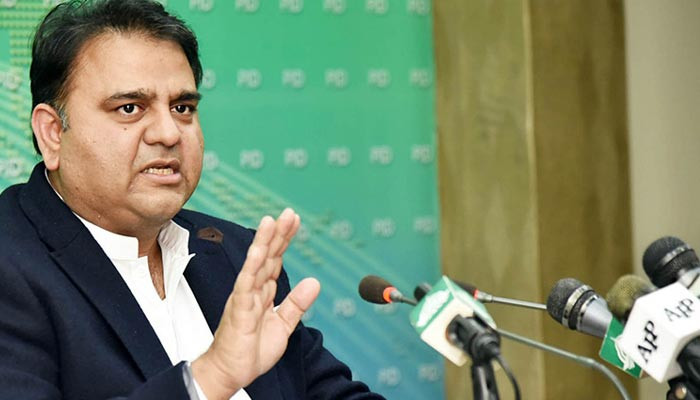 ISLAMABAD: Federal Minister for Information and Broadcasting Fawad Chaudhry on Tuesday said that the next elections should be held through electronic voting machines (EVMs) and “they will be accordingly.”

Addressing a press conference after the meeting of the federal cabinet, the federal minister said that the government would abide by whatever order came from the court.

Chaudhry further said that a committee has been constituted regarding EVM which will liaise with the Election Commission of Pakistan.

He assured the nation, “We will provide whatever assistance is required by the government to the Election Commission regarding EVMs.”

The minister added that the PML-N should thank the present government as “now Nawaz Sharif’s sons will also be allowed to vote” in the next general elections.

Accusing PML-N vice-president Maryam Nawaz of “making fake leaks”, Chaudhry said there were many such videos and “this is not the first time”.

He described Maryam’s attitude as “always negative”, adding that she and the PML-N’s social media wing “make fake leaks”.

Furthermore, expressing further suspicions about Maryam, he said that “perhaps Maryam Nawaz is also making videos of her party members to bring them under her control”.

Chaudhry claimed that an audio clip attributed to former Chief Justice of Pakistan Mian Saqib Nisar had been “proved false”.

“Everyone involved in these games is right in front of us,” he said.

An audio clip of Nisar was allegedly leaked online in which one person could be heard telling another that Nawaz Sharif and his daughter Maryam Nawaz were “punished for making room for Imran Khan in politics”. Will have to suffer. “

On Sunday, he tweeted: “Advise SCBA to remain neutral, only then lawyers can do their part!”

The Minister further said that the press release of the Supreme Court Bar Association is in accordance with the Constitution of Pakistan.

Flour prices are high in Karachi

On rising inflation in the country, Chaudhry told the media that the price of sugar would come down to Rs 85 per kg in the next fortnight.

“Unfortunately, the prices of essential commodities in Karachi are much higher than in other parts of the country,” he lamented, adding that prices of tomatoes, onions and garlic have come down.

However, the minister added that oil and electricity prices were rising.

“Flour prices in Karachi are higher than other cities in the country,” he said, adding that sugar is currently being sold at Rs 107 per kg in Karachi.

It may be mentioned here that during the week ended November 18, Pakistan recorded 18.34% (year-on-year) increase in the weekly inflation based on Sensitive Price Index (SPI) for the combined income group. ۔ – Most since April 2021.

According to provisional data released by the Pakistan Bureau of Statistics (PBS), average prices of 27 essential commodities, including chicken, coking oil, bananas, vegetable ghee, eggs, etc., rose during the week under review. Are

Prices of 10 items, including bags of tomatoes, sugar, onions and potatoes, declined during the period.

‘Decisions made at provincial level have proved to be better’

Reacting to Fawad Chaudhry, Sindh Information Minister Saeed Ghani said that ever since the Federal Minister joined PTI, he has neither knowledge of constitution nor laws.

The provincial minister said that Sindh has procured 1.2 million tonnes of wheat as per the requirements of the province.

“Wheat production in Punjab is more than 70 per cent,” Ghani said, adding that the crop disappears in the province within a month of the new crop. Where did 6.6 million tons of wheat go?

He said: We [people of Sindh] They are suffering the consequences of the incompetence of the federal government.

Talking about inflation, he said that when the price of petrol in Pakistan is Rs. can do?

Responding to Chaudhry’s statement regarding inflation in Karachi, Ghani said that the provincial government has a price control mechanism.

“The Pakistan Bureau of Statistics (PBS) releases inflation data not only for Sindh but for the entire country,” he said.

He added that the incompetence of the federal government has led to the sugar, flour and gas crisis.