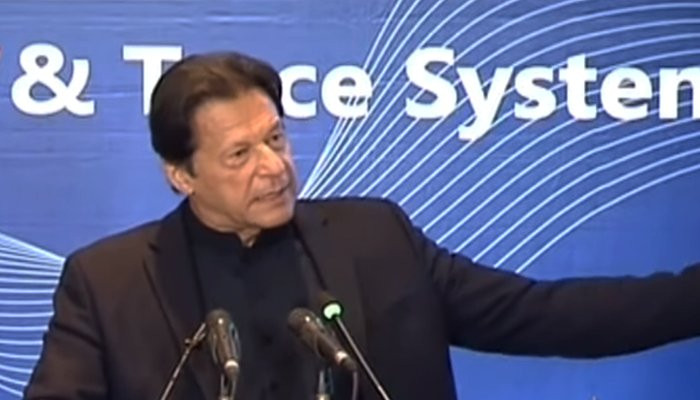 ISLAMABAD: Prime Minister Imran Khan on Tuesday stressed on taxes for the country’s economic stability and survival, saying that the absence of “tax culture” in Pakistan puts the country’s sustainability at stake.

The Prime Minister expressed these views while addressing the launching ceremony of the Track and Trace System in the Sugar Sector of the Federal Board of Revenue (FBR).

The system introduced by the FBR will ensure electronic monitoring of sugar production and sales.

Prime Minister Imran Khan hoped that the use of technology would help prevent tax evasion and increase revenue collection to Rs 8,000 billion annually.

Our biggest problem is that we have to borrow to run the country. Countries cannot function without taxes. Our stability is at stake, ”he said.

He congratulated Shaukat Tareen, Advisor to the Prime Minister on Finance, to the FBR and other concerned agencies for introducing the technology-based system, which has been under way since 2008.

The Prime Minister said that the launch of Track and Trace System was a great and positive achievement which would have far reaching effects.

He said that due to the reasonable proportion of GDP to taxes in the West and being the highest among the Scandinavian countries, Pakistan has not been able to promote tax culture in the past due to various reasons including the lifestyle of the ruling elite. Donor confidence hurt. In governments.

He remarked that the practice of non-payment of dues has been going on since the colonial era when people felt that their hard earned money was being taken away by foreign rulers and they were not being provided basic facilities.

Talking about the challenges facing Pakistan, he said that the most important issue that the government has to deal with is that it does not have enough money to run the country, which is why we have to borrow. Is”.

He likened the situation to a family struggling with financial constraints and never moving forward because they do not have enough savings to invest in the future.

“It is very important that this culture thrives in Pakistan because our sustainability is at stake here,” he said, adding that between 2008 and 2018, Pakistan’s debt quadrupled.

The Prime Minister further said, “It amazes me that these people (past rulers) should be punished. In 10 years, the debt of Rs 6 trillion has reached Rs 30 trillion.”

He said that no major project was introduced at that time which could benefit the country.

“So our challenge was tax collection and I commend the FBR team for the record tax collection,” he said, adding that the government aims to take it to Rs 6,000 billion.

Prime Minister Imran Khan said that out of this amount, Rs. 3000 billion would go into debt repayment. “And we will have Rs 3,000 billion left for a population of 220 million,” he said, adding that their health, education needs and infrastructure needs would be met.

“And then we need to invest in research and agriculture, which has a lot of potential,” he said.

The prime minister said that without enough money to support all these projects, the government would have to borrow and “we live in this vicious circle”.

“The only way to end this is to increase our tax collection,” he said, adding that this would be possible only through the use of technology and that the track and trace system was a big step in that direction. ۔

Talking about the youth, he said that they would end up being the “engine of growth” for Pakistan and there would be a need to invest in them, which is possible only by earning more.

The Prime Minister said that the government was working hard to reduce the luxurious lifestyle of the ruling elite for which the austerity drive was in full swing. Pointing to the distance, he said that the expenses of the two FBR offices have been reduced by “Rs 1.1 billion despite inflation”.

He said that when people see that money is being spent on them and taxes are for the welfare of the people then the impression will change automatically.

No bag of sugar can be taken out of the production place without identification.

An earlier statement from the Prime Minister’s Office said that the system would be used in the next phase to monitor the movement of goods from production to sales in major sectors such as fertilizer and cement. Will go

“Electronic surveillance will extend from the production of goods to the use of consumers, which will increase the country’s revenue, bring transparency to the system and prevent tax evasion,” the statement said.

He added that with the introduction of track and trace systems in the tobacco sector, the FBR is now launching electronic monitoring in other major sectors such as sugar.

The FBR is also planning to introduce the system in the beverage and petroleum products sectors soon.

As soon as this system starts working in the sugar sector, no bag of sugar can be taken from the production site, factory or manufacturing plant without stamps and individual identification.

It is pertinent to mention that the Track and Trace System was enacted on November 11, 2021.