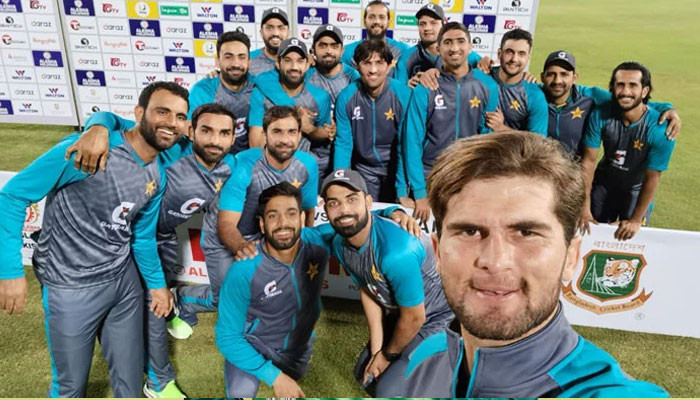 DHAKA: Despite winning the three-match series against Bangladesh on Monday, the Pakistani team was “surprised” not to receive the trophy.

Although Pakistan whitewashed Bangladesh in the recently concluded Twenty20 International (T20) series – they beat the hosts by five wickets in the third and final match after a dramatic last over yesterday – Bangladesh Did not give the trophy to Man in the Green.

However, a spokesman for the Bangladesh Cricket Board (BCB) told the Pakistani team management that they would hand over the trophy after the end of the Test series.

The BCB added that the head of the board was supposed to hand over the trophy to the Pakistani squad but could not do so due to his unavailability.

The spokesman said officials from the board and sponsoring companies were not part of the biosecure bubble, so the trophy ceremony could not be held in accordance with COVID-19 protocol.

Pakistan made a clean sweep in the T20 series against Bangladesh.

Mohammad Nawaz hit a boundary on the last ball as Pakistan beat Bangladesh by five wickets in the third T20 International on Monday to whitewash the series.

The visitors were seen coming ashore in Dhaka after Bangladesh captain Mahmudullah Riaz limited the hosts to 124-7 before creating late enthusiasm in the last over.

Iftikhar Ahmed hit a six off the fourth ball to reject Mahmudullah and recaptured the victory before being bowled out for just one wicket.

Nawaz saved Pakistan to take 127-5 and break the heart of Bangladesh.

Mahmudullah, who ended 3-10, damaged his total with the first bat.

At the end of the match, Mahmudullah said, “The batsmen of both the teams struggled a little.” “(We) needed to spend some time on the crease to take advantage.”

Debutant Shahidul Islam bowled Rizwan for 40 but Haider scored 45 off 38 balls to bring Pakistan closer before he became Mahmudullah’s first victim in the last over.

When the host team decided to bat first, the Pakistani bowlers had earlier stopped any pace.

Debutant Shahnawaz Dahani bowled Najam Hussain for five in the second over of the innings before Muhammad Wasim and Usman Qadir shook the hosts.

Babar credited Whitewash to Team Spirit in the series.

He said that the credit goes to the group for the way each individual has performed. There is always room for improvement.