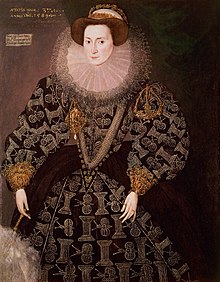 Her portrait dated 1589 via Hieronimo Custodis is stored at Woburn. Her garments are embroidered with pearls in patterns of moths and pillars. On her sleeve she wears a big pendant appearing a scene of Diana and Actaeon and any other pinned to her bodice depicts Perseus and Andromeda.[1]